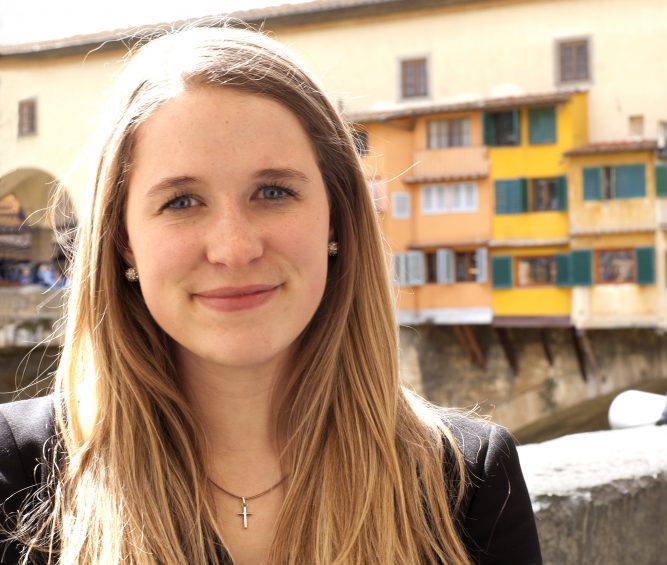 If the prayer by local American universities and their directors this past June that the Coronavirus contagion curve would not take an upswing in the U.S. and Italy (see Repubblica Firenze’s The Future Remains Uncertain for U.S. Students in Florence) was not answered, at least a hope—more than one—has come true.  The first was spelled out by the December 20, 2020 clause added to the Italian Consolidated Act on Immigration.  The tedious and time-consuming procedure to apply for a “permesso di soggiorno” permit to stay is now waived for students at their institutions who live here 150 days or less, substituted by a “dichiarazione di presenza.”

The Association of American College and University Programs in Italy (AACUPI) had also previously stipulated an agreement with the Florence prefecture in November 2020.  As announced, this will be designed to step up security during the evening and night, paving the way for a greater integration of students into Italian life in tandem with the creation of a support system available 24/7, info points and help centers.  Another big step facilitating the presence of U.S. students took place in June, when the non-profit Misericordia outpatient clinic system throughout Tuscany started allowing access throughout 2021 to both general and specialized exams and procedures, including COVID 19 swabs.  Misericordia M.D.’s have taken on the role of a family doctor for students affiliated with AACUPI programs, thus making their services available for those not covered by Italian national health care.

The news is the result of efforts by AACUPI leaders Portia Prebys (president) and Fabrizio Ricciardelli (secretary-treasurer).  The latest, on a national level, was an effort involving Italian legislators Deputy Interior Minister Vito Crimi and parliament member Massimo Ungaro.  While a “dichiarazione di presenza” will never be a substitute for a student visa, still a requirement, the new law eases pressure and the work load at both at police headquarters which processes thousands of requests annually, and at study abroad campuses.

Says Ricciardelli, “The ‘dichiarazione di presenza’ will have to be submitted to the Questore (head of the local police) within eight days after entry into Italy, along with another document, the “dichiarazione di garanzia,” by which the hosting branch [of the school] guarantees to inform the Questore within 48 hours of any change in the student’s presence in Italy. Concrete instructions are awaited…and we would clearly welcome the possibility to file them electronically, even only to avoid crowds of people on line.”

U.S. study abroad programs in Florence generally provide semester and/or shorter summer study opportunities—with the exception of Smith, Middlebury, California State and Pepperdine that offer a full academic year–but the change in law will be applicable to Cal State students who come just for one semester.  It is estimated that over 95% of local American study centers will now be exempt from having to guide students in filing for a “permesso di soggiorno” permit to stay which almost never was issued during their time in Tuscany, even for those who attended school from September to May.

“This is a great accomplishment,” says Robert Shackelford, director of Harding University in Florence.  As former AACUPI secretary-treasurer, he remembers trying to establish useful European-wide contacts in an effort to modify the requirement on a EU level six or seven years ago.  Another long-established U.S. program in Florence, which requested anonymity, details what was described as “the never-ending saga to get a “permesso di soggiorno.”

“During the first few days of school, students would convene in our largest classroom to watch a Power Point presentation explaining the forms, that come in a postal kit given to each, which faculty and staff would help fill out.  Several appointments would be made to deliver the paperwork, taking a few at a time to the post office, as the initial step in a process that costs at least €200 a head.  Students then received text messages for mandatory appointments at the local police headquarters, first for fingerprints, then for biometric data collection, always accompanied by the director, a faculty or staff member.  Appointments often were scheduled during a student’s class time, internship, exam period or field trips, creating difficulties.  Everyone would receive a receipt at the end of the process, which they are supposed to turn in at the airport when they leave, although many kept them as souvenirs of their stay.”   On his part, Ricciardelli adds, “the material lack of the “permessi di soggiorno” also meant potential problems when traveling around the Schengen Area after the first 90 days of stay and many other concrete difficulties, such as obstacles for curricular internships.”

Florence and Tuscany together with local U.S. campuses, providers and agencies, are waiting for Americans to return to the second most popular study destination in Italy, as attested by the numbers—estimates range from 10,000 to 12,000 a year.  While waiting for this to happen, American programs in Florence had reorganized the fall 2020 semester to last no more than 89 days, so students who already have a passport could arrive just as a normal visitor who is required to leave after 90 days.  Then, due to the spike in COVID-19 infections, nearly every institution canceled onsite classes (as was the case of Florida State, Harding, Lipscomb and others) or switched to online courses (Cal State, Pepperdine, Gonzaga).  Several—including NYU in Florence and its international freshmen group, James Madison, with its graduate program and independent provider organizations collaborating with colleges in the States—offered onsite learning this past fall to a handful of students, no more than a total of 150, while following Coronavirus safety protocols.

It is almost a year since American students in Florence were evacuated when the first Coronavirus wave hit northern and central Italy (as reported by Repubblica Firenze’s Coronavirus: Eight U.S. Programs in Florence Close, the Majority Stay Open), but like fall ’20, very few are expected to arrive in person to Tuscany for spring ‘21.  In contrast to Stanford in Florence, which has suspended its spring quarter, Kent State has organized a hybrid semester: eight weeks online, with a choice of either coming to Florence for the remaining eight weeks or continuing online.  Concurrently Elon University is going ahead through the Accademia Europea di Firenze and several master’s degree programs in political science or architecture continue to welcome students.  Like fall ’20, citizens of European Union member states, Iceland, Liechtenstein, Norway, Switzerland and permanent residents of Italy are allowed to live and study at the NYU campus.  Other are continuing their remote learning credit experiences, including Syracuse in Florence with its Abroad@Home spring 2021 online courses in Mediterranean Food and Culture, Business, Craftsmanship and Branding Success in an Italian context and Cross-Cultural Management.

In the meantime, an affiliate of the American International University in London, Richmond in Florence has closed after more than 30 years of organizing on-site classes for U.S. students, but not because of the COVID-19 crisis.  The British Institute of Florence, which has hosted several American college programs in the past, is in a unique position.  Recognized under the 1953 Anglo Italian Cultural Convention, it is a registered U.K. charity with no public funding.  The B.I. will continue an online program of art history and English courses starting imminently in addition to introductory and core programs on the treasures of medieval, Renaissance and modern Florence.

Looking ahead, Florence’s Harding and Pepperdine universities have students enrolled in the 2021 summer sessions; likewise, Georgetown students can sign up for June’s two-and-a-half week course on “Educating Young Children with Disabilities” in Fiesole (all with the go-ahead circumstances permitting).  The same proviso applies to Syracuse-in-Florence for the summer, which also has a scholarship student who would come during that period.  Others—like FIT, Smith and Middlebury—plan to reopen in fall ’21 at the earliest.

American college and university programs are in the same situation as the world is waiting for the pandemic to be tamed in 2021.  In the meantime, recently introduced “Covid-free flights” from the U.S. that exempt travelers from otherwise mandatory two-week quarantine if found negative to a double Coronavirus test, one just prior to boarding and one upon arrival, are helping to facilitate students realize their dream of a study-abroad experience, although their numbers are currently still minimal.  (rosanna cirigliano)