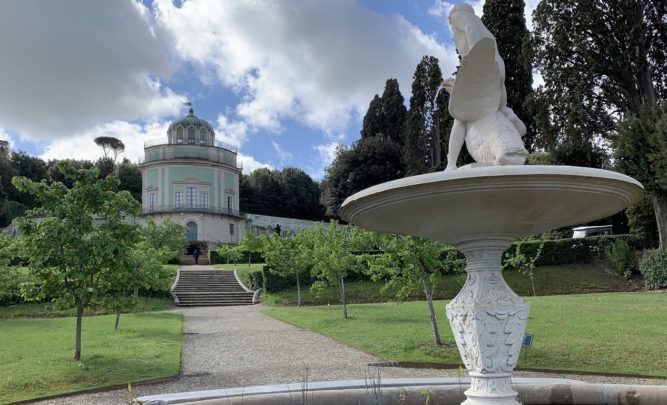 Restorations of ancient spaces and additions of modern elements are giving a new and exciting look to Boboli gardens. The Pitti Palace museum complex also provides the opportunity to visit two art shows—one that is contemporary and the other historical.

The Ananassi Botanical Gardens within Boboli is now accessible to the public for the first time in history (hours: 9 am to 1 pm Monday – Friday). The only Romantic style garden in the area, the green space was established in response to the Industrial Revolution as a way to forget the humdrum tasks of daily life, distracting the visitor with the natural, serene beauty of nature, which it does well. Paths provide a glimpse of flowerbeds as well as plants that thrive in tropical and subtropical settings.

Beginning May 6, more work—the renovation of the orchid greenhouse in addition to the aquatic plant pond with a secret passageway hidden in back—will begin in this section of Boboli.

It’s not only the plants that will have a fresh start. In a part of Boboli that has always been open to the public, the Fontana delle Scimmie will be returned to working order: water will once again flow from the cherub statue on top of the fountain. Several statues have been restored and will be returned once finished; at this time, only Hera and Modesty have been replaced. There are also 46 new stone benches scattered in the park, soon to be increased to 60.

Additional “A New Spring for Boboli” renovations have been completed in other sections, with the stabilizing of the monumental cypress near the Amphitheater, repairs of the drainage system, and the repotting of citrus plants. Others are still ongoing; in the fall, the Viottolone dei Cipressi and the Viale dei Platani will be given new trees: 53 cypresses and 25 sycamores will put down roots on their respective paths.

The Kaffeehaus is in the process of being refurbished, signaling a new beginning for a multiple-tiered garden coffeehouse constructed in the late 1700s. On the upper floor of the building, the Gelateria Buontalenti will be inaugurated, named for the architect who created the Grotto Grande at Boboli in the Mannerist style and also the inventor of “sweet ice,” the predecessor of modern gelato. Gelato that will be served in the future at the Kaffeehaus will showcase a flavor utilizing the fruit of Boboli’s citrus trees.

The Boboli Gardens are open from 8:15 am to 6:30 pm in May, September and October, until 7:30 during July and August (closed the first and last Monday of the month); admission €10.

Representing the last 20 years of his career, 16 works by the English artist Tony Cragg have just been installed throughout the Boboli Gardens. Placed in a serene, green setting against the Renaissance backdrop of Florence landmarks, the utterly contemporary pieces provide a contrast designed “to provoke a strong reaction in the observer, whether it be pure emotion or an intellectual interpretation,” according to Uffizi director Eike Schmidt.

After visiting the Boboli, one can see two temporary exhibitions that feature both female-based as well contemporary themes at the Pitti Palace (included in the general admission fee of €16, €8 for EU residents ages 18 to 25, to all museums on the complex).

The show highlights the role of women from the unification of Italy in 1861 up to shortly after World War I. Artists, scientists, photographers, teachers, white-collar workers, all are showcased in some way, shape or form.

Women are the focal point in all works, which comprise paintings, drawings, historical documents, and other exhibits.

Two dresses offer a glimpse into the world of fashion during the era: a loose dress, a physical metaphor for women’s liberation from the corset, and a plain wedding dress, an early example of a mass manufactured item of clothing straight from England.

Exhibits celebrate female innovation, with the establishment of one of the first art schools utilizing nude models in Italy open to women by Nera Simi, and international connections, spotlighting figures such as Florence-born nurse Florence Nightingale, painter Elisabeth Chaplin, and actress Eleanora Duse. The display provides a glimpse of women who stayed at home to plait artisanal hats from local straw, a popular cottage industry in Tuscany. Books written by notable female authors, including Nobel Prize winner Grazia Deledda and educational pioneer Caterina Franceschi Ferrucci, are also on view in glass cases.

While dedicated to showing the rising influence of women out of the mists of the past, some of the feminine mystique remains a secret: no one knows the identity of the woman in Michele Tedesco’s The Tempest nor what Stella is thinking in Vittorio Corcos’s painting Stella and Piero.

Until June 2: WHAT I SAW ON THE ROAD, works by Kiki Smith.  Andito degli Angiolini.

From bronze statues to woven cotton tapestries to papier-maché paintings, “What I Saw on the Road” is a collection of multi-media modern art pieces by German-born American artist Kiki Smith.

The exhibition contains several wall-to-floor tapestries that resemble embroidered Flemish tapestries from centuries past. On woven fabric, a deer peers at viewers as they enter the corridor while, in the very last room, a short animation of a white wolf loping around darkness plays on repeat eternally. Animals, plants, and other earth elements are scattered across the jacquard cotton: birds wheel around the open white skies and moths brighten a cold black background.

But more than that, Smith presents a look into the fragile nature of humanity using nature as a lens. In one piece, a woman walks along the riverbank, a snake circling around her from a tree as she stares calmly ahead; it brings to mind Eve and the snake, only they are in peace with one another.

Other pieces, however, have seemingly nothing to do with the nature theme of “What I Saw on the Road.” One wall is covered with solid bronze stars on either side of a doorway. At the very back of the corridor, there is a silver statue of a seated male adult that is five feet tall staring dead ahead with a raised hand and blank eyes. Called “Annunciation,” the sculpture reminds viewers of the meeting between the archangel Gabriel and the Virgin Mary.

Kiki Smith was born January 18, 1954. In 1976, she moved to New York City to join Colab (Collaborative Projects), an artistic group both innovative and radical.  She has since won a multitude of awards. Her art has been featured in the San Francisco Museum of Modern Art, and Regent’s Park in London. Her work has previously traveled to Italy as part of the Venice Biennale. (katy rose sparks)