A Digital Display of Dante Drawings at the Uffizi 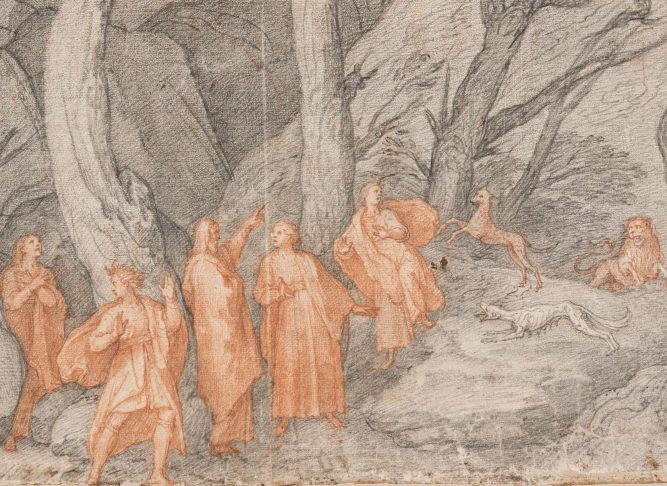 2021 marks the 700th anniversary of the death of Florentine poet, Dante Aligheri. While the first celebratory event took place in October with Massimo Sestini’s photo exhibition, the Uffizi is leading Florence into a year of over 50 scheduled events with a virtual show of drawings of Dante’s Divine Comedy by Italian Mannerist artist, Federico Zuccari.

“A riveder le stelle” (To See the Stars Again) will be the first time all 88 Zuccari’s drawings will be shown online, let alone digitized. Separated into the three sections of Inferno, Purgatorio, and Paradiso, the show will also include the verses depicted, Zuccari’s commentary, and short descriptions by the Uffizi. All the text is available in both Italian and English. The organization of the works pays homage to how they were originally composed, designed to be bound into a book, accompanied by the corresponding verse as well as a short commentary from Zuccari himself.

Though Zuccari is most famously known for his frescoes that adorn the inside of the Duomo, these drawings are an exceptional example of both the artist and his intellect.  Created between 1568 and 1588 when Zuccari was in Spain, intricate red and black ink drawings bring forth the intensity of the Divine Comedy in a way that hasn’t been done before. The entire collection was donated to what would become the Uffizi Gallery by Anna Luisa de’ Medici in 1738, nearly 150 years after their creation. Since then, the drawings have only been otherwise exhibited in 1865 at Palazzo Medici Riccardi and in 1993 at Dante’s house in Abruzzo.

While we all miss the excitement of seeing artwork in person, in this case a digitized exhibition is actually more advantageous to viewers than it would be if presented in a museum gallery setting. Because of the nature of the medium, works on paper can only be exhibited in a thermoregulated environment under low-lighting. Virtually, details can be viewed more intimately using a zoom tool included on the museum’s website. “These beautiful drawings have only been seen by a few scholars and by the public two other times,” says museum director, Eike Schmidt. “Thanks to this initiative, they are published in full, with a didactic-scientific commentary on the Uffizi website, where they will be freely available from now on.”

“It’s a point of pride for the Galleries to inaugurate the 700th anniversary of the death of the poet, with this extraordinary collection of drawings available to all – not only for researchers but also for all those in pursuit of, as Alighieri says, ‘virtue and knowledge.’” (savannah camastro)