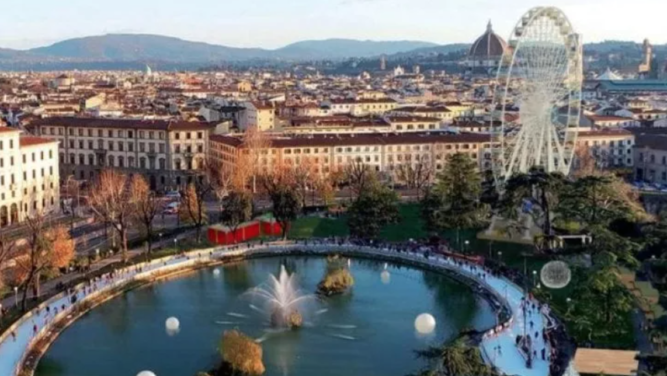 Just in time for Christmas, a new Ferris wheel standing at 55 meters (180 ft.) will be situated near Fortezza da Basso alongside many other holiday attractions. This large construction which will be inaugurated for the next month will have 200 seats and sport a large LED panel in the middle for announcements and advertisements.  Florence’s city council has approved the placement of this Ferris wheel for use between December 1 and January 15 in Piazza Oriana Fallaci. Guests get a ride for €10 and by showing their Green Pass.

Joining the Ferris wheel is an ice rink for visitors who wish to partake in some skating, a Christmas tree to add to the festivities and cultural activities for children and families. There will also be Santa’s House, food stalls and crafts.  Planning and construction is being led by Sviluppo Pg srl, who will be presenting the details to the municipality of Florence for final approval.

The location of the Ferris wheel has changed a couple of times due to opposition to its proposed placement. It was originally suggested that it would be constructed in Piazzale Michelangelo, likely because holiday decorations have become an annual tradition in December. After being met with backlash by local residents, plans were changed and the new venue proposed was the Cascine Park. This led to a similar response as the Piazzale, which ultimately led to the decision to place it in the garden of Fortezza da Basso.  (nelson matos)