A Site Specific Installation on Palazzo Strozzi by Artist JR 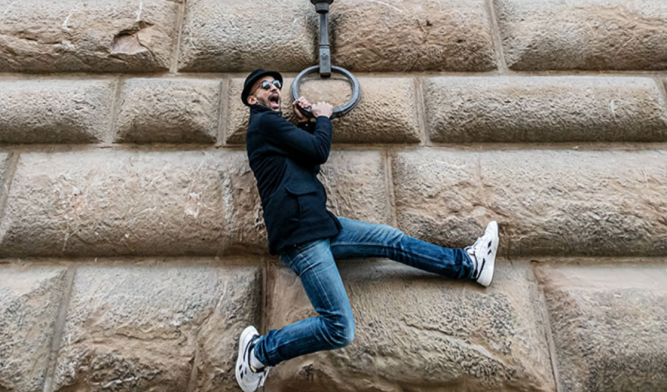 French artist JR is exhibiting his work on the façade of the Palazzo Strozzi. The livestream of its unveiling is available on Facebook at https://www.palazzostrozzi.org/archivio/eventi/la-ferita-presentazione-del-progetto/

The title of the work, La Ferita, reflects on the inaccessibility of cultural sites in the age of Covid-19. With two previously planned exhibitions at Palazzo Strozzi being postponed due to increasing Covid-19 restrictions, JR’s exhibition will be presented on the façade of the Palazzo, inviting passersby to connect freely with art in public places. By exhibiting La Ferita on the Palazzo Strozzi façade, the work creates an entertaining dialogue between the antiquity of Renaissance architecture and the subversion of JR’s collage photography.

Originally from Paris, JR’s name is a pseudonym, with his real identity unknown to the public. He has described himself as a ‘photograffeur,’ a blend between photographer and the French word for graffiti artist, graffeur. As a teenager, JR has said he was a graffiti artist and later became interested in photography. His first large scale piece, Portraits of a Generation, showed pictures of youths who lived in housing projects across Paris’s buildings. The illegal exhibition was quickly noticed by the City of Paris, who further encouraged its display by putting more of JR’s art up on buildings. Commenting on his interest in projecting unexpected imagery on city streets, JR said in 2005, ‘in the street, we reach people who never go to museums.’

Since then, JR’s work has been commended internationally for its realistic expressions of youth, humanity, culture, memory and identity through portraiture, collages and murals. Often unveiled in public areas, JR’s oversized photography finds itself in urban locations such as building sides, rooftops, and bridges throughout major cities in the world. In 2011, JR won the TED Prize and in 2018 he was included in Time Magazine’s list of 100 Most Influential People.

La Ferita has been organized by the Palazzo Strozzi Foundation and Andy Bianchedi, in memory of Hilary Merkus Recordati. It will be displayed until August 22. (mirabella shahidullah)