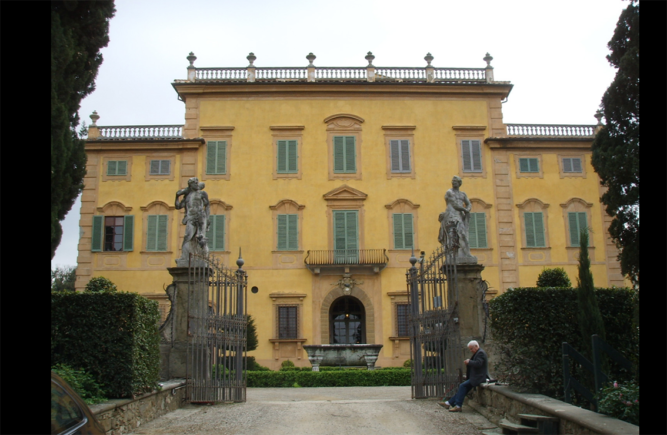 NYU Florence (Via Bolognese 120, bus 25 from San Marco) will be offering the public free guided tours of the magnificent palace, Villa La Pietra, and the beautiful, adjacent gardens for six days: Monday, October 7 through Saturday, October 12. The visits are available in English and Italian, by appointment only; to reserve a spot call 055/5007210 or send an email to villa.lapietra@nyu.edu.

Arthur Acton, a descendent of an Anglo-Italian family, purchased the villa and the property in 1903. A year later, his son, Sir Harold Acton, was born there. From 1932 to 1939, Harold Acton lived in China where he translated Chinese plays, lectured, and immersed himself in the culture. In 1939, he decided to go back to Florence to his villa, which he inherited after his father’s death in 1953.

When Acton died in 1994, he left Villa La Pietra in his will to New York University, which now offers a myriad of courses to their students.  Since receiving the bequest, NYU has preserved the estate according to its original 1930s appearance, including the formal Italian garden with statues, commissioned by Arthur Acton and his wife, Hortense Mitchell.

Built in 1908, although La Pietra’s garden was inspired by Renaissance park design, the choice of plants and flowers reflects the taste of the local Anglo-American community at the end of the nineteenth century. The Italian garden is naturally integrated into the Tuscan hillside, preserving a traditional naturalistic equilibrium, one often depicted in art over the centuries.Thanks to careful work of NYU, the garden and the agricultural lands are carefully maintained.  Renovation starting in 1999, was based on photographic archives.

Tours include an introduction to the Acton’s art collection and a stop in the ballroom, where the visitor can admire a large Aubusson tapestry on the theme of Circe, created according to a 1760 design by Jean Baptiste Oudry. The tapestry was recently unveiled after a 10-year restoration,  presented at an international seminar just last month.