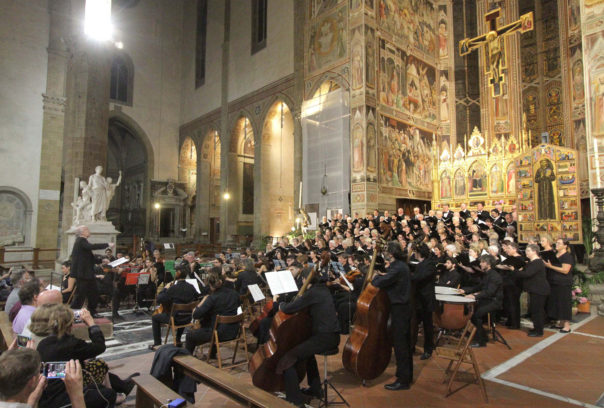 Choruses from across the United States are making their debut in one of the greatest churches in Florence. In a night dedicated to classical music, the Florence Chamber Orchestra will be performing in tandem with American choirs to make enchanting music.

The set list this year is primarily based off of Ludwig van Beethoven with a singular piece by Franz Schubert. Beethoven’s overture of “Fidelio” will be something to look forward to, as Beethoven’s only opera he ever wrote. The current overture was written in 1814 after Beethoven scrapped his previous three versions after their performance.

Beethoven’s “Symphony no. 6,” or “the Pastoral Symphony,” is next in the lineup. This symphony is one of Beethoven’s better known symphonies, often heard as background music in movies or the main score for movies such as “Fantasia” by Disney in 1940. The symphony is one of the few works by Beethoven that contains programmatic content, a performance that contains a narrative in the program notes. The piece is also unique as it contains five movements, instead of the typical four.

The concert ends with “Mass no. 2, D. 167” by Franz Schubert in 1815. The original piece was written in less than a week after Schubert’s first mass was met with praise. The piece has an interesting history: it is one of Schubert’s shorter pieces that he composed between his longest masses, the first and the sixth. In 1980, an edited version of the mass was found in the Klosterneuberg monastery in the town of the same name in Austria, which is now believed to be the Schubert’s final version.

Participating choruses Wednesday night include the Houston Baptist University Chorus from Texas, the Celebration Choir of the First Presbyterian Church, and Hardin-Simmons University Concert Choir also from Texas. Soloists will include soprano Kathryn Wieckhorst, tenor Vladimir Reutov, and bass Diego Colli, all of whom are trained opera soloists. The conductor will be Peter Tiboris, back again from last year’s series.

There are a few returning artists this year from previous editions of the series: soprano Kathyrn Wieckhorst and conductor Peter Tiboris, back again from last year’s edition. This is the fourth edition of the Great American Choral Series in Santa Croce, organized by Estate Fiorentina and the MidAmerican Production, the U.S. society that organizes concerts for the famous Carnegie Hall in New York. (katy rose sparks)