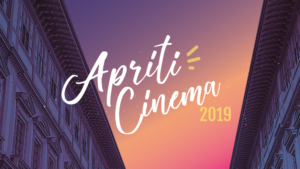 For the third consecutive summer, Florence will host a cinematic experience like no other — the 2019 edition of Apriti Cinema, films in the open-air courtyard of the Uffizi from June 26 to August 8.  The spectacular venue will hold a different screening each night at 10 pm, showing a total of 46 movies over 43 days, all free of charge.

A multi-organization initiative that shows films in the open-air courtyard of the Uffizi, the curated series pulls its movies from a variety of sources, including festivals both Tuscan and international, and is organized around multiple themes. While some selections are designed to pair with current exhibitions at the Uffizi Gallery, others honor specific filmmakers, notable anniversaries and geographic regions. All films will be screened in their original languages with Italian subtitles, while 21 are either with English audio or subtitled in English, to ensure that the festival is accessible to Florence’s substantial international community.

Apriti Cinema will screen the English-language Tea with Mussolini (1999) on June 26, as an opening-night homage to Franco Zeffirelli, a Florence-born director whose death on June 15 sent the city into mourning. The story of a young boy’s mentorship by a group of expatriate women in Fascist Italy, Zeffirelli’s foundation suggested showing this film over the director’s many Shakespeare adaptations because of its Florentine setting and semi-autobiographical content.

Florence remains the focus on the second night, June 27, with the documentary Calcio Storico – Il sangue di Firenze about the city’s iconic game, which the directors will present in person. Apriti Cinema will also take part in the year-long festivities dedicated to Cosimo I de’ Medici, with the three-part 1972 miniseries L’età di Cosimo de’ Medici by Roberto Rossellini and The Profession of Arms (2001) by Ermanno Olmi airing from August 5-8, the latter of which will have English subtitles.

Director Paolo Sorrentino, who will receive the designation “Master of Cinema” at an event in Fiesole on July 20, will also be honored, with three of his works included in this year’s lineup. His directorial debut L’uomo in più (2001) will show on July 4 with English subtitles, while This Must Be the Place (2011) on July 11, starring Sean Penn and Frances McDormand, and Youth (2015) on July 18 were made with English audio.

Collaborations with a few festivals will also bring seldom-seen works of world cinema to the Uffizi this summer. Middle East Now has supplied five films highlighting Afghanistan, Syria, Palestine and Iran, the first of which, Hassan Fazili’s Midnight Traveler (2019) on July 2, will make its Italian debut at Apriti Cinema. All of this collection will feature English subtitles, and many will also be introduced by the directors themselves.

The NICE Festival has arranged for a few nights dedicated to Russian cinema from July 31 to August 4, and the Festival dei Popoli will honor the late French director Agnes Varda with screenings on the first four Wednesdays in July. Individual nights focused on Sweden and South Korea, which is celebrating 100 years of its film industry, are also scheduled for July 5 and 14, respectively. These sections will be subtitled in Italian only.

A unique opportunity worth highlighting is the night of July 20, a double feature of movies made more than a century apart. Designed to pay tribute to the 50th year since the first moon landing, Apriti Cinema will show Georges Méliès’ silent classic A Trip to the Moon from 1902, followed by Antoine Bardou-Jacquet’s Moonwalkers from 2015. The chance to see the former, a beloved piece of history considered the first ever science fiction film, in such a grand setting is a good reason to circle this date on your calendar.

Beginning at 10 pm each night, all screenings are free and the space’s 285 seats will fill up on a first-come-first-serve basis. July 25 is the only night that will not feature an Apriti Cinema screening, as the space is booked for a concert. A new initiative this year will provide free water, both still and sparkling, to spectators.  (alex harrison)