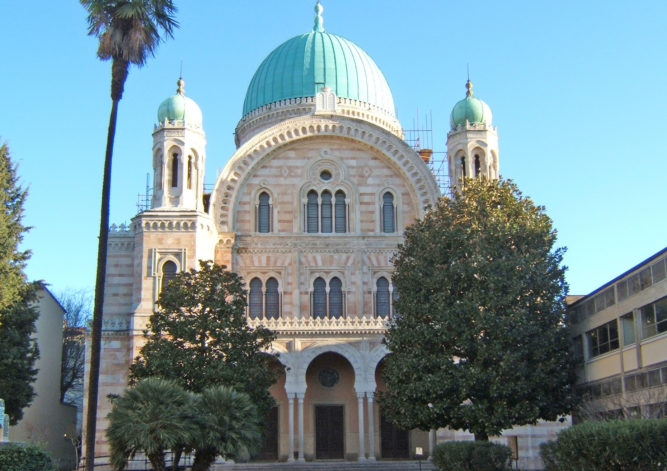 Humor and contemporary issues will intersect at a delicious brunch at the synagogue on Sunday afternoon, May 26, with a talk in English by a Jewish British author.

“The Jewish World According to Howard Jacobson between Humor and Reflection” will be the subject of the Florence synagogue’s ‘Balabrunch with the Author.’ He will be speaking about the role of humor and reflection in Jewish history as well as his own history and his Jewish point of view in this era with an ironic flair. The talk will be moderated by the Jewish community of Florence’s council member of culture Laura Forti and associate professor of English literature at Venice’s Ca’ Foscari University Shaul Bassi.

Brunch will be prepared by local chefs Michele Hagen and Jean Michel Carasso. The menu will include cumin and anise khobz (a type of bread), bissara (vegetable pure), rfissa (a chicken and bread dish) with lentils, a French Moroccan salad, loubia (a bean soup), sweet carrots, and mint tea. The menu was inspired by North African flavors and dishes.

The talk is free to the public at 11:15 am. Brunch is immediately afterwards for €10. There will be a scheduled tour of the synagogue at 2 pm for €5. Reservations are necessary at 055 2346654 or 055 245252 or at the emails sinagoga.firenze@coopculture.it or sandra@firenzebraica.it.

This brunch is a precursor to Jacobson’s itinerary in Tuscany. On May 27, he will give a talk at the University of Pisa at 3 pm. Invited by the University of Pisa, the Jewish Rete Toscana, the Community of Pisa, and CISE (the M. Luzzati Interdepartamental Center of Jewish Studies), Jacobson will be interviewed by philosophy, literature, and linguistics professor Roberta Ferrari and CISE director Fabrizio Franceschini in English.

Howard Jacobson is a columnist for “the Independent,” the British newspaper. He has written several books, two of which have been translated into Italian: “J” in 2016 and “My Name is Shylock” in 2016. His books are about the British Jewish community in both the present day and past; he is often called the ‘English Philip Roth,’ though he calls himself the ‘Jewish Jane Austen.’ His cutting humor is meant to cause reflection in the public.

This is the third edition of ‘Balabrunch with the Author,’ which are talks by Jewish authors in English at the synagogue on Sunday afternoons. These events have been held in conjunction with the communities of Siena, Livorno, and Pisa with the Rete Toscana Ebraica with the aim of introducing more Jewish artists and intellectuals to the Tuscan community.