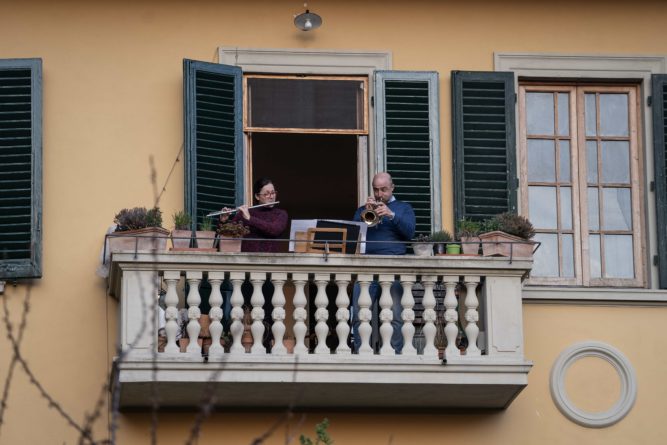 Right now, Florence and Tuscany are “spellbound,” with streets and squares in a state of suspended animation; nearly everyone is home following the government decree of March 11, in which further restrictions were implemented to combat the spread of Coronavirus. The region’s cultural institutions have organized in the meantime to continue activities for the public in a safe manner, with singing from the balconies, virtual visits of the Uffizi and Pitti’s vast art collections, home delivery of books, and free downloads of novels offered by an author.

Every Thursday and Sunday starting at 6 pm the public is invited to go out on their terraces (weather permitting) to sing and play an instrument to interpret a song chosen by the Maggio Musicale Fiorentino, the Orchestra della Toscana, the Fiesole Music School and the Cherubini Conservatory. This initiative is called “La città incantata” which has a double meaning: “the enchanted city,” and “the city of song.” These four major musical institutions in the Florence metropolitan area will communicate the piece chosen for the performance several days ahead of time. Their aim is to unite citizens and give them a means of joyful public expression during this problematical period of restriction.

With all of Florence’s museums off-limits until April 3, the management of the Uffizi Gallery has come up with a creative way of bringing one of the world’s most prestigious art collections, including that of the Pitti Palace museums in addition to the Boboli Gardens, to one’s home. These daily installments are designed to help pass the time during the Coronavirus emergency. The slogan of the initiative is “even staying home is an art.”

Mirrored by name and concept, the new social media campaign, identified by the hashtag #UffiziDecameron, is inspired by The Decameron, a collection of stories seemingly spun by a group of women and men living in a villa on the outskirts of Florence to escape the plague during the Middle Ages. This literary classic was actually written by Giovanni Boccaccio (1313-1375), a native of the Tuscan town of Certaldo.

On the museum’s Facebook page, GallerieUffizi (@UffiziGalleries), a video series “La mia sala,” is available in Italian. Viewers will experience a guided tour of a section of the museum by a curator, presented as a short story in the spirit of “The Decameron.” The debut was dedicated to the Uffizi’s Contini Bonacossi collection of paintings, drawings, sculptures, majolica ceramics and furniture. Some of the world’s most important artists are represented, ranging from Duccio and Giovanni Bellini to Velazquez, Goya and Tintoretto. Another post shows spring flowers blossoming in the Boboli Gardens in a burst of color.

On the Uffizi Gallery Instagram account (@uffizigalleries) a different work of art is posted daily, accompanied by an extensive explanation of the piece that focuses on little known facts and interesting details both in English and Italian. Some of these have a story within a story, as seen in Alessandro Allori’s painting of “Judith with the Head of Holofernes.” Allori (1535-1607), a late Mannerist artist, portrayed his lover as Judith, her mother as the old servant, and himself, as the Holofernes decapitated by love, alluding to his dilapidated fortune.

Another post spotlights a mystery portrait of a young woman. The work, initially thought to be a nun because of her veil, thought to have been depicted by Leonardo da Vinci, shows a fashionably dressed lady of the period.  Her identity is still unknown to this day, and the authorship subsequently attributed to Ridolfo da Ghirlandaio.

The @UffiziGalleries Twitter account is mainly in Italian with an occasional phrase in English. One of the latest posts cites the lyrics of a song by the Italian rapper Rancore, “Se sai quant’è bello ciò che aspetti, è bella anche la sua attesa” (If you know what you are waiting for is beautiful, even the wait is good”). The singer’s words are illustrated by an evocative painting of a man in the shadows holding a torch, aptly named “L’attesa” (Waiting) by artist Torello Ancillotti (1843-1899). (rosanna cirigliano)

In this unique period, however, efforts are being made to provide people with access to services in spite of the closing of all places that draw crowds. As such, many businesses are turning to home delivery as a means of keeping things running; one example of this is the Florence Anglo-American bookshop, the Paperback Exchange on via delle Oche. Commencing on March 16, books from the shop will be delivered to addresses within the city limits. Again, Facebook, Instagram and email will be the platforms used to place requests, and customers will be informed of availability and price; if the requested book is not in stock, the store will still attempt to order it and have it delivered within four to five days, provided that the government keeps couriers running.

Recommendations include several recent releases: Hilary Mantel’s “Mirror and the Light;” Donna Leon’s “Trace Elements;” and Colum McCann’s, “Apeirogon.” The Paperback Exchange will also post pictures and suggestions on Facebook and Instagram in order to give people the option to see and “browse” the shop’s shelves.

Paperback Exchange is also offering a “Mystery Box” option. Depending on the amount paid (25, 50, 75 or 100 euro), the store will choose which books go in the box, and will try to include a mixture of fiction, non-fiction, literature, classics and so on, depending on preference. This allows customers to support the bookshop if they would like to, and is also a way of giving used books a new home—these can be later brought back to the shop and exchanged for 40% store credit.

It is not just a bookshop that is providing alternative ways for people to retain access to their literature during the quarantine period. Christine De Melo, an American author living in Florence and specializing in historical fiction set in Italy, is offering free PDF versions of all of her novels via a link to her Amazon page on Facebook. This link allows people at home to read certain chapters of her novels for free, and once they have decided which book is of most interest, Christine can be contacted via email or directly through a private Facebook message, after which she will send over the PDF of the selected title. (alfie king)