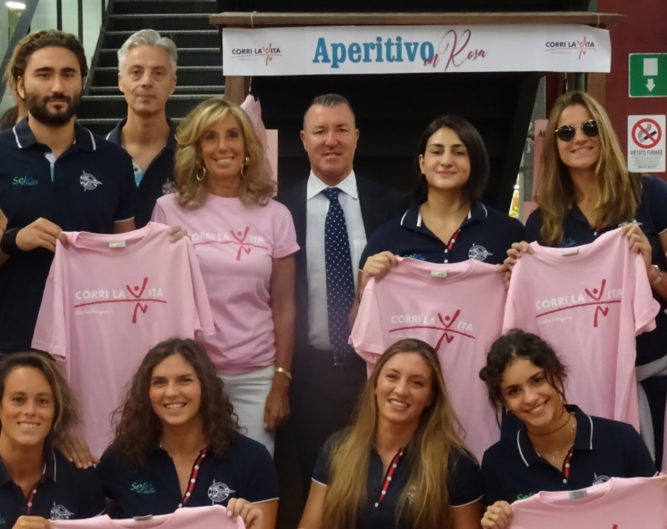 Sunday, Sept 29:  CORRI LA VITA (Run for Life) 17th annual fundraiser for breast cancer treatment and research. The race starts at 8:45 am.  Participants are invited to meet at the starting line before 8:30 am in Piazza Vittorio Veneto (located in the Parco delle Cascine, Florence). Corri La Vita offers a walk of approx. 5.5 km (3.5 miles) open to all, or a run of approximately 11 km (nearly 7 miles) that is also open to everyone.

There are no winners or chronometric times taken, so no chip is necessary. For those who sign up up online, your T- shirt and number will be available for you to collect from a special booth in Piazza Vittorio Veneto from 8 am on the day of the event. Or if you sign up in person, you’ll receive your T-shirt and number immediately.

Solidarietà, translating to “solidarity” in English, is indisputably the primary buzzword when it comes to Corri la Vita. The annual running event, initiated 17 years ago with the intention of raising money and awareness for breast cancer research, has fixed this value of togetherness, community, and fellowship at its core.

The race has made quite a name for itself in the city of Florence, receiving the “fiorino d’oro” prize, the city’s highest honor. The event is well known across the continent as well, as it is one of the most successful and engaging fundraising initiatives in Europe. With the 2018 race alone, Corri la Vita attracted 35,912 participants of a variety of ages, from Florence and other cities, and raised € 700,000. Since its inception in 2003, the initiative has collected € 5,700,000.

The donations go to several breast-cancer related projects, but one of the main goals for 2019’s race is to continue to finance the Progetto EVA. The initiative concentrates on supporting women suffering from the side effects that come with breast-cancer treatment, a challenge that is often not prioritized. The Progetto EVA has been orchestrated in partnership with LILT (Lega Italiana per la Lotta contro i Tumori), an organization that offers many critical services revolving around support and prevention.

September 2019’s race consists of a variety of routes, and participants can choose according to the level of difficulty desired. In the spirit of the 500th anniversary of Leonardo da Vinci’s death, and the subsequent frenzy of cultural events that have dominated the city this year, both of these running courses will pass by the Chiesa of San Bartolomeo at Monte Oliveto. The church contains a copy of one of da Vinci’s greatest works, the Annunciazione (1472), while the original is in the Uffizi.

This year, yet another initiative has been added to the scheme: the more-pertinent-than-ever issue of sustainability. The t-shirts that Corri la Vita distributes, one of the project’s pillars, are all wrapped in biodegradable packaging. Water distributed to runners at stops along the course of the race will be served in recyclable cups — no plastic!

The race itself is not the only element of the festivities. There will be street food in Piazza Vittorio Veneto, and all vendors will be donating 20% of the proceeds to Corri la Vita.

The Corri la Vita t-shirt, a light pastel pink color this year, represents the race’s value of togetherness — to wear the shirt is a statement of support and caring. Ideally, the city-center will be a sea of light pink on September 29. Following the theme of solidarity, many famous Italian  have been donning the shirt and snapping a picture to show their support. Among hundreds are writer Alessandro Barricco and comedian and actress Luciana Littizzetto. Take a look here.

The shirt will be embroidered with designer Salvatore Ferragamo’s signature, symbolic as well of traditional Florentine values of style and luxury fashion. To truly bring the event full circle in its relationship to the city, those wearing the shirt will be granted free access to various shows and exhibitions during the afternoon. No matter the theme, no event can stray too far from Florence’s cultural and artistic legacy.

On the day of the race, a number of Florence landmarks will offer free admission to participants of Corri La Vita, including: the Natalia Goncharova exhibition at Palazzo Strozzi; the “Sustainable Thinking” show at the Ferragamo museum; the Antiques Show at Palazzo Corsini; Palazzo Vecchio, the Novecento Museum of  20th Century Art; Forte Belvedere; the Marino Marini Museum; the Gucci Garden; the Innocenti Museum in piazza Santissima Annunziata; and the Stibbert Museum, among others.

Otherwise, it is still possible to sign up on Friday, September 27 and Saturday, September 28 at the Corri La Vita stand on via Martelli/Piazza Duomo or in piazzale Vittorio Veneto from 7:30 to 8:30 am on Sunday, September 29.