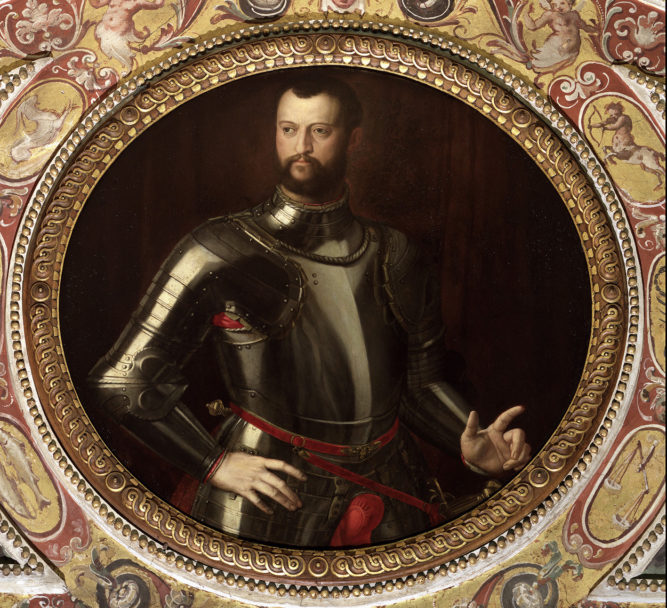 The Medici year in Florence will be celebrated until the end of 2019 to commemorate the 500th anniversary of when Cosimo I de’ Medici and Catherine (Caterina) de’ Medici, two pivotal figures in European history, were born. The birthday of Cosimo I, Wednesday, June 12 figures prominently in this festive calendar.

On that day, the city’s iconic Palazzo Vecchio will open the Sala di Cosimo I to the public for the day, from 9 am to 11 pm. This special room currently makes up part of Mayor Dario Nardella’s offices and is usually closed to visitors, but those who arrive early enough will even learn about the room from Nardella himself. The Sala di Cosimo I is filled with artwork depicting the Medici family, including various portraits and triumphant battle scenes.

Additionally, the Bargello National Museum is introducing a new tour called Cosimo I: The Sculpted Portrait, which will introduce the visitor to a chain of significant sculptures dedicated to Cosimo through the building. Florence’s former Grand Duke commissioned several artistic renderings of him during his reign, including portraits, statues, reliefs and even coins, many of which are part of the Bargello’s extensive collection. The themed tour will run through December 31 and is included in the museum’s standard entrance fee.

In the evening, the festivities will relocate to the San Lorenzo Church, which is hosting Cosimo’s Night from 6 – 10 pm. The entire complex will be open for a guided tour, a rare cooperation with the Medici Chapels Museum, the Laurentian Opera, the Parish of San Lorenzo and the Laurentian Library, each of which administrates a different section of the complex.

Beginning from the Cannon’s Cloister, a courtyard that was originally adjacent to the living area, visitors can wander through the Chapter Archive and Laurentian Library, an architectural marvel and home to more than 3,000 historic manuscripts. From there, the path will lead to the main body of the church, known as Brunelleschi’s Basilica, and the Old Sacristy, which features eight reliefs by the artist Donatello. The tour will end in the New Sacristy, designed by Michelangelo and finished according to specifications in Cosimo’s will.

These areas are normally subject to different visiting hours and ticketing, but the entire space will be reconnected for one night only. The Cosimo’s Night tour is free of charge, but must be reserved with the Medicean Laurentian Opera, which is managing the event.

On the following night, June 13 at 9:15 pm, San Lorenzo will host a musical performance of the Missa ducalis, written by Costanzo Porta in honor of Cosimo I. Umberto Cerini will conduct the Ensemble Lilium Cantores in their performance, again organized by the Opera; no reservation is required for the free concert.

Twenty-two organizations have arranged more than 50 Medici-themed events throughout the year, ranging from exhibitions and tours to concerts and historical reenactments. (alex harrison)