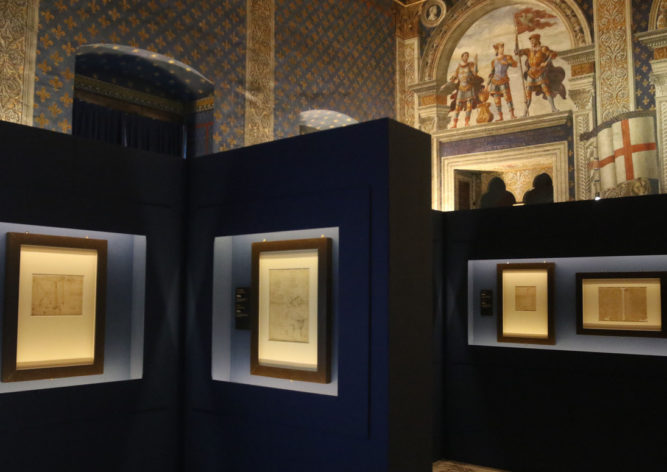 An exhibition dedicated to the Codex Atlanticus, specifically 12 sheets of the 1119 pages of an original manuscript containing drawings and captions, details Da Vinci’s creative genius and foresight.  The Codex, found in the Ambrosiana Library in Milan, contains designs depicting his visions of helicopters and armored tanks, centuries before they were actually built.

One sheet contains a note to Sandro Botticelli about his use of perspective, recalling the period when both artists were part of Verrocchio’s workshop. Other sheets illustrate his long-time fascination with flight and birds, including a childhood memory of his dream of a kite.  The inventor’s flight experiments from Monte Ceceri near Fiesole date from this time, further demonstrating his connection to Florence.

Another page details his witnessing his mentor Andrea del Verrocchio’s golden copper ball placed atop Brunelleschi’s dome.  The final exhibit is a painting of Christ by Gian Giacomo Caprotti, known as Salai, a follower of Leonardo. (rita kungel)