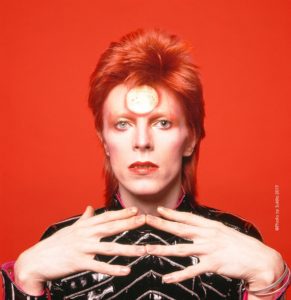 Over 60 photographs tell the story of David Bowie’s career, and the unique relationship between the English singer songwriter and Japanese photographer Masayoshi Sukita. The images follow over 40 years of artistic collaboration, from their first meeting in London, to photoshoots in Tokyo and Kyoto, Japan. There is even an opportunity to do the classic pose with a leather jacket that is provided, next to the famous “Heroes” album cover. Through iconic and more intimate shots, the photos show the years friendship between the two artists, and the phases of Bowie as an artist.

The collaboration began when Sukita stumbled across a billboard with the famous “The Man Who Sold the World” poster on the streets of London. He was immediately taken by the striking image of David Bowie, pictured holding a guitar with one leg up in the air, and bought a ticket to his 1972 show at Royal Festival Hall, where the pop icon was performing with Lou Reed. Sukita, who had heard his music before, was impressed by his talent, the diversity of his lyrics, and the extraordinary world he had built around himself.

Through Sukita’s stylist friend Anthea Takahashi, who worked for Japanese fashion designer Kansai Yamamoto, creator of many of Bowie’s costumes, he found a way to meet him in person and snap some photos. Bowie loved Sukita’s work so much that he arranged another shoot in the U.S. This time they captured the iconic picture of the red backdrop and stunning black costume by Yamamoto, which is in the first room of the exhibition.

The next photographs show Bowie’s shifting style in ‘77, where Sukita switched from vivid colors to black and white photos to match Bowie’s choice to wear a leather jacket. Posted on the wall is an image of the photo roll from the shoot, with a red circle around Sukita’s favorite, later chosen as the cover for “Heroes.” Over the next few years they continued to work together, even meeting up in Japan.

Sukita speaks of his relationship with Bowie as being a sharing of cultures, as he was interested in Western lifestyle, and Bowie in Eastern. The next room displays photographs of when they met again in Kyoto, Japan, where Bowie expressed his desire to see the real city, not the tourist sites. They spent the day taking the subway, and visiting the traditional markets. Here Sukita captured moments when Bowie appeared more relaxed, leaning against a wall with a cigarette, or in a telephone booth.

The photographs move through the ‘80s and ‘90s, where the two friends continued their artistic collaboration. Sukita titled a photo of Bowie with a beard and with a deep look in his eyes, “KI”, which means “air” or “soul” in Japanese.

See the works documenting the wild spirit and deep soul of David Bowie in Palazzo Medici Riccardi. Follow the two artists, musician and photographer, who continued to work together up until the end of Bowie’s life in 2016. (nicole grant)