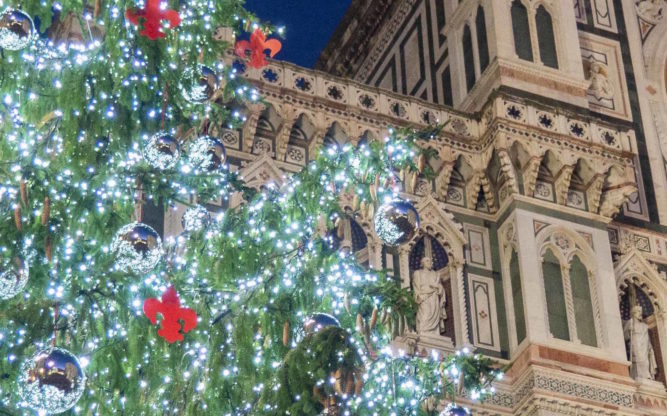 After an uneventful holiday season last year due to COVID restrictions, upcoming holiday happenings promise to make up for lost time with sights and activities found all around the city.  The week of December 8 inaugural program includes tree lighting and a Christmas fair in Santissima Annunziata.

Majestic firs from the Val di Fassa in northern Italy are being set up, adorned with ornaments and illuminated on the evening of December 7 to officially kick off seasonal festivities.  The tree lighting schedule is as follows:  Palazzo Vecchio courtyard at 5 pm; Piazza Duomo at 5:30 pm; Piazza della Repubblica at 6 pm; Piazzale Michelangelo at 6:30 pm; San Lorenzo at 7 pm, ending in Piazza San Firenze at 7:30 pm.

Amongst the most notable of these trees are the ones at Palazzo Vecchio, characterized by brilliant reflection effects, and Palazzo Medici Riccardi (which will be lit on December 8), inspired by the surrounding Renaissance architecture.  Decorations for both were designed and created by students of Liceo Artistico Leon Battista Alberti art high school.  Onlookers will be provided with a kaleidoscope visual of lights.

OTHER HOLIDAY INITIATIVES, which are bound to attract one of the interest of residents and visitors alike, include:

— Christmas music will fill the air in Piazza Signoria and San Firenze from December 7 to January 6 thanks to the Andrea Bocelli Foundation;

— the La Fierucola gift market in piazza Santissima Annunziata (see description below) on December 8 from 9 am to 7 pm;

— a Nativity scene will be displayed adjacent to the Duomo (Cathedral), starting on December 8 until the day of Epiphany on January 6, featuring life-size recreations of Joseph, Mary, Jesus, an angel, the ox, the donkey, a shepherd and two sheep, all made of terracotta. All of these figures have been made by craftsmen using a historic Impruneta kiln.

The crib will be blessed by Cardinal Giuseppe Betori before the celebration of Holy Mass during the feast of the Immaculate Conception, beginning at 10:30 am on December 8. Unfortunately, the Opera di Santa Maria del Fiore announced that the traditional Ride of the Magi involving the recreation of the Three Wise Kings’ visit will not take place on January 6 due to the risk posed by crowds gathering during the COVID-19 pandemic.

— a concert of traditional Christmas songs will offered by the Compagnia di Babbo Natale (Santa Claus), who will perform on the steps of Palazzo Vecchio on December 8 at 4 pm.

— Palazzo Medici Riccardi will make an exception for its normal weekly closing day on Wednesday by opening to guests on December 8 to visit the museum and be present for lighting of the Christmas tree in the courtyard at 4 pm.

— A “Christmas House,” by the Meyer Children’s Hospital in Piazza della Repubblica, will feature charity events from December 11 to 24;

— Prato’s Pecci Contemporary Art Center is holding a free admission day to all exhibitions on December 11 from 11 am to 8 pm;

— A group dressed as Santa Claus and his elves will descend from the Palazzo Vecchio tower and then unroll a 12 meter (40 ft.) long holiday banner on December 12 at 11 am;

— Mayor Nardella will host the traditional season’s greeting ceremony to residents and guests, accompanied by the Remuto  Rhythmic Symphony Orchestra and the colorful pageantry of Historical Parade of the Florentine Republic, in Palazzo Vecchio’s Salone dei Cinquecento on December 15 at 6 pm;

— Piazza Oriana Fallaci at the Fortezza da Basso is hosting an ice rink, Ferris Wheel and adjacent Christmas village for the enjoyment through January 16.

To celebrate the feast of the Immaculate Conception, a group of local farmers will bring the fruits of their labor to Fierucola market. The event, on December 8, will also see a variety of artisan and eco-sustainable goods be sold in Piazza Santissima Annunziata, made or cultivated organically in Tuscany. Sandra Pelli, the president of La Fierucola Association of Florence APS, said that “in a moment where environmental issues are becoming increasingly prevalent, Fierucola offers an alternative: ethically cultivated products to help plan a healthy diet and handmade crafts that also double as a Christmas gift.” Since its founding in 1984, this organization has always supported organic producers with respect for health and sustainablity.

Among the many foodstuffs being sold, visitors can find newly pressed olive oils, fresh vegetables and fruits, wine, honey, jam, cheese in addition to bread and  flours made of ancient grains— all of which are grown with no pesticides and no further than the local region. Guests can also find many traditional Christmas desserts and baked goods sold to add to the festive spirit.

La Fierucola will also offer holiday items made by hand, including wreaths and Christmas decorations. The use of traditional methods provide an antique feel to other wooden and ceramic gifts found in the market: ceramics with lead-free glazes, children’s games and toys made with natural dyes; hand-woven textiles; hand-bound diaries; natural soaps; board games and more.

A special presentation will take place under a gazebo at the fair at 3 pm with author Elettra Lorini, where she will present her new book “Nella marroneta. Realtà e incanto.” She retells the story of her work as a caretaker for chestnut trees, all by using poetry. This will be followed by Stefania Capecchi and Lia Buonagurelli presenting “I cereali minori,” the first volume of their ‘ScuolAlimentare’ series. This series is aimed at spreading a contemporary and healthy Mediterranean diet, published by Montaonda.  (nelson matos)