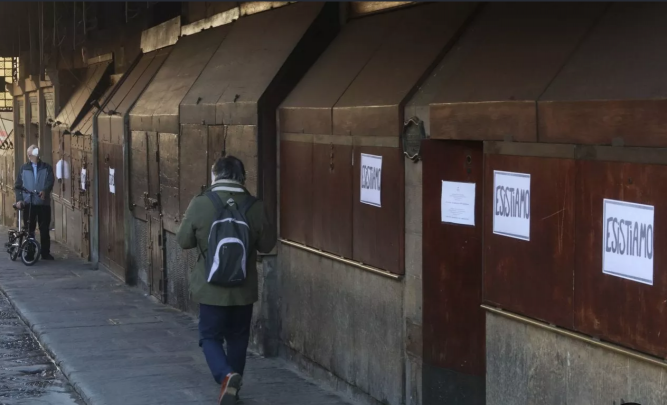 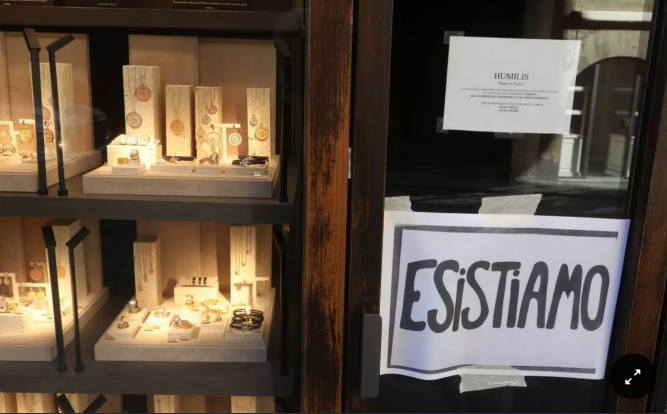 Another round of lockdown restrictions has again depleted trade and sales throughout Italy, but with Florence taking the most severe hit. With business down in the city almost 43%, stores and markets are in crisis mode. Hundreds have taken to the streets in an effort to save their trades. Protests erupted throughout Florence from business owners to employees alike, left without work or receiving minimal income.

In red zones, only essential businesses such as pharmacies, grocery stores, and supermarkets are allowed to stay open, and travel is not permitted except to go to these places,  for work or health emergencies. For shops that do not sell food products combined with a lack of locals and tourists, the situation is dire. Being out of work means people are also trying to save what little money they do have and not spending as much either.

Also ahead of the fall lockdown, many stores were beginning to announce special discount deals for Black Friday, a notorious shopping day after Thanksgiving. But given the restrictions, small traders were forced to close, and missed out on what could have been a helpful contribution to income as people get ready for the holidays. Because of this, an initiative was started by Barbara Zannoni, an owner of a clothing store on Via Senese. From her window a sign simply says, “We exist.” The action has spread around the city to Ponte Vecchio and Borgo San Jacopo, as can be seen from the photos above.

Florence led the ranking of Italian cities that experienced a drop in sales at -42.8% in October. This has brought new fears for the upcoming holiday period, as many shops cannot survive another closure. According to Danilo Bencistà, the president of “Le Cento Botteghe,” the association for the shops on Via Gioberti, clothing stores accumulate most of their revenue between October and March. As Tuscany became a red zone in mid-November, the situation has only worsened.

The theme around the protests focuses on the absence of government help and a call to cancel taxes until business can normalize again. In Palazzo Pitti merchants devised a flash mob to demonstrate the disparity between the loss in revenue and the taxes that have not been adjusted to the pandemic. Many owners are going into debt just trying to survive. Without government assistance, the only relief possible if they want to keep their shops open is to take out bank loans.

Around 50 stall owners and shopkeepers also protested at the steps of the Basilica of San Lorenzo, asking for economic assistance from the government. The event was organized by the Confesercenti Firenze trade association and was attended by retailers and wholesalers from San Lorenzo, Santa Croce, Piazzale Michelangelo, and the Porcellino. Many of their businesses rely on the tourism industry, but from the existing travel ban to lockdowns and continuous closures, the city is bare of foreigners. It will be difficult to reopen once tourism returns if the government does not intervene and without local contribution. “We need a plan to relaunch tourism in Florence,” says Daniele Nardoni, of the association.

In addition, vendors from the open-air markets came to Piazza Duomo. Fifteen thousand families have their business in Tuscany and have been brought to their knees due to the health emergency. Almost all of them have unsold merchandise from the spring lockdown with no outlet until they can reopen and people are allowed to frequent them.

The Confcommercio Toscana shopkeepers association announced a strike against the business tax as the same costs from before COVID are still enforced though businesses are not making the same revenue because of the pandemic. Despite the grave financial situation, the general secretary of CGIL Florence, Massimiliano Bianchi, refuted, “Talking about a tax strike means, in our opinion, breaking the constitutive pact of civil coexistence.” But through research, the Confcommercio were able to determine that “the abrupt stop imposed by the pandemic [has] already brought consumption back by thirty years… which now risks compromising the existence of an entire entrepreneurial system.”

Florence mayor Dario Nardella remains hopeful and attentive in the situation, focusing on the proximity of a working vaccine. The city’s efforts will hopefully bring a transition from a red zone back down to an orange zone, in which case commercial activities can resume. Ahead of the winter season, the governor of Tuscany Eugenio Giani added, “Go to small shops, check the labels and buy Tuscan to eat genuine and support the local food supply chain… Let’s make a choice of solidarity with local companies.” (cathy doherty)