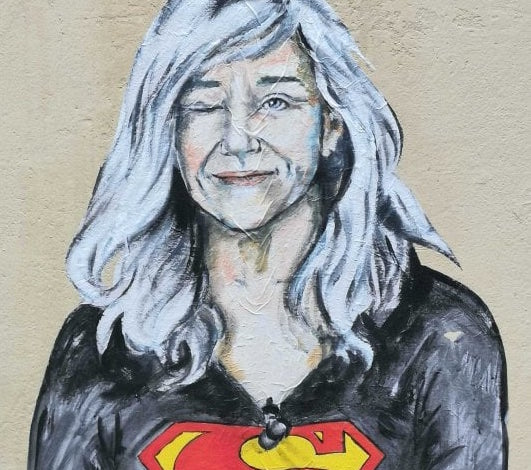 Since the beginning of the coronavirus pandemic in Wuhan, China, journalists have been dutifully reporting on the emergency from all locations. Rai foreign correspondent Giovanna Botteri has been reporting from Beijing, giving live TV updates on the evolution of the virus. Viewers, however, have become more focused on her plain black v-neck and lack of statement make up than on her journalism. After Botteri was critiqued for always wearing the same shirt and hairstyle, and the center of a body shaming scandal between networks, the artwork group Lediesis made a bold statement on whose side they were on with their latest installment shown above.

The satirical news program Striscia la Notizia streamed a segment featuring Botteri, compiling various clips of the journalist in what has become her “uniform” and cropping these images with filters. People were outraged by what has become a moment of body shaming, the public focusing more on the physical appearance of a female journalist than the merit of her reporting.

The hosts of the show, Michelle Hunziker and Gerry Scotti, seemed to be making fun of Botteri’s appearance and the fact that she was not conforming to fashion and makeup expectations society holds for female correspondents. However, Hunziker, who is a showgirl and known for her commitment to combatting violence against women, took to social media explaining that their channel was defending Botteri, not body shaming the journalist. She went on to discuss the unfortunate phenomenon of body shaming prevalent in the media industry.

In response to this conversation on body shaming, the art group Lediesis –– known for their street art depicting strong female figures, including artist Frida Kaldo, Egyptian Queen Nefertitti, and astrophysicist Margherita Hack, often winking and wearing the Superwoman emblem –– created a portrait of Botteri in Florence’s center. Botteri is depicted wearing a basic black shirt with the “S” emblem in bold and microphone clipper to her collar. On their Instagram, Lediesis exclaimed their sincere esteem for the journalist. While the winking signature may hold less empowering undertones, Botteri’s portrait reminds us that Superwomen exist regardless of physical appearance––in fact size, beauty, skin color, gender shouldn’t even be part of the equation.

Botteri herself responded to Hunziker, explaining that given her lack of social media accounts and the time difference –– her being in China –– she had only just received Hunziker’s apology. She went on to say that the two women were not fighting; instead she spun the scandal away from herself and expressed her hope that this moment will unhinge society’s focus on a female reporter’s appearance rather than her words. Botteri hopes this conversation on body image and beauty expectations will continue and open doors for future generations of women. There is even a Facebook page devoted to Botteri and her black v-neck; however, majority of the comments praise the journalist

In an era of mass media, which has only amplified as people around the world struggle to maintain human connection online, our perception of detail has shifted. Instead of focusing on the bigger picture at hand, the loss the pandemic has had on the world as Botteri reports, we zoom in on minor details such as the shirt color of a journalist. Hopefully as we move forward to a new normal, our priorities will realign, as well.  (elizabeth berry)