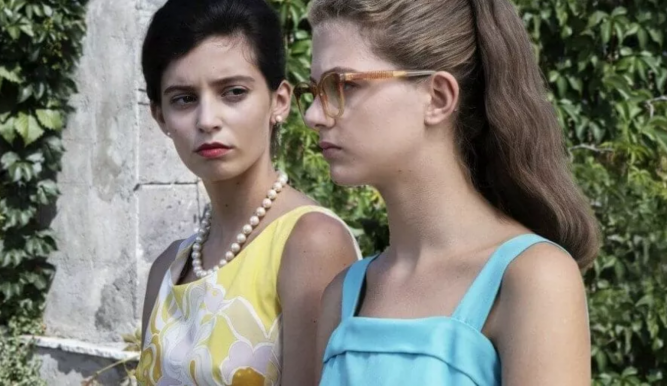 Much like the secrets the two protagonists in Elena Ferrante’s best-selling Neapolitan Quartet keep from each other, the filming locations of the TV adaptation of her third novel Those Who Leave and Those Who Stay, have not been revealed in direct terms.  Due to the closing of various roads around Florence, however, it is clear that the historic center will be the backdrop for an installment of the Neapolitan Quartet in its third season after the debut of My Brilliant Friend.  The newest episodes, co-produced by Rai Fiction and HBO Entertainment, will begin shooting in the city of the Renaissance on Feb. 2 and continue until Feb. 20 with support from the municipality and the Tuscan Film Commission.

Ferrante’s four-book series, translated into English by Ann Goldstein, includes My Brilliant Friend, The Story of a New Name, Those Who Leave and Those Who Stay, and The Story of the Lost Child.  The internationally popular Quartet is a bildungsroman (a novel on the formative years of one or more protagonists) that follows Elena (Lenù) Greco and Raffaella (Lila) Cerullo from their adolescence growing up in Naples to their early and late adulthood. Elena recounts their complicated friendship as a 60-year-old woman after she learns that her friend has disappeared without a trace. Part of the obsession with the series is readers’ curiosity about the true identity of Ferrante, who has remained anonymous throughout her literary career thus far.

The second season, based on The Story of a New Name, was shot in Pisa in 2019, required an extensive production crew, and lasted four weeks.  This year, filming will take place in Florence at two different intervals: in February and September and the series will also incorporate scenes shot in Versilia, along the Tuscan coast.  Scenes in Florence’s historic center are set near the Duomo and the Arno River, as well as in Piazza della Repubblica, Piazza della Signoria, Piazza Santa Croce, and Piazza Santissima Annunziata. Parking bans around the city will begin on Feb. 1.  Other locations are found outside the city center, including the suburbs, where Elena lives with her fiancé Pietro in the novel.

This new series will pick off where the second concluded: Lila fleeing her abusive husband and Lenù seeking a fresh start after publishing her first successful novel and about to marry Pietro.  The third season will also introduce new actors to the well-received series after the initial episodes, namely saying goodbye to actresses Gaia Girace and Margherita Mazzucco, who played Lila and Lenù respectively, due to a big age jump in the plot.  Daniele Luchetti is replacing Saverio Costanzo as director.

The new season is not only exciting for devoted fans of Ferrante and the series, but also for the city of Florence. Mayor Dario Nardella explains the production symbolizes a rebirth of cinema and culture after months of lockdown. The Florence-based filming is also a positive development for the city’s economy. In fact, the Hotel Mediterraneo will function as office space for the production, costuming, tech, and set design crews. The third season will also require 100 technicians, actors, costume designers, and make-up artists to bring to life the difficult moments that Lila and Lenù experienced in the 1970s. If you are interested in working on set as an electrician, prop maker or carpenter apply by sending a message to the following email address with relevant credentials: lamicageniale3.risorseumane@gmail.com. (elizabeth berry)