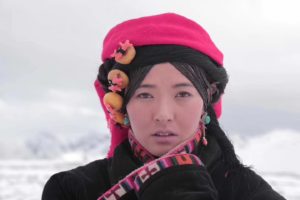 Back in Florence for its 2nd edition is the FànHuā Chinese Film Festival. Founded by Xiuzhong “Gianni” Zhang, the festival mirrors his hopes to bridge Italian and Chinese culture. The festival is unquestionably a labor of love which spotlights not only the artistry of Chinese contemporary film but also Chinese cuisine and Chinese arts and crafts.

The name FànHuā meaning a variety of blooming flowers, becomes even more fitting for this year’s wide and varied program. The program comprises 15 films categorized by themes: Opening Night, New Talents, Female Gazes, and the Past and Present.13 of the 15 films will have subtitles in both English and Italian. The cost of entry to afternoon screenings are €5 while evening screenings are €7.

The pre-opening on Thursday, October 20 features the international premiere of director, Dadren Wanggyal’s, “Wind.”.A story placed in a Tibetan village dominated by antiquated patriarchal traditions. Gelak and her mother face constant discrimination by the other villagers because the daughter was born out of wedlock.

Friday, October 21 spotlights New Talents. At 15:30 the festival features a cluster of five short films including, “Where the Leaves Fall,” “Standard Temperature,” “The Blue Boy,” “A Short Story,”“I Have No Legs and I Must Run.”“Where the Leaves Fall” by Italian Xin Alessandro Zheng’s features a story about a young Italian-Chinese student named Giacomo. Giacomo travels to Wencheng, China to bring back the ashes of his late father.  When he arrives in his parent’s hometown he stays with his grandfather, who becomes a guide to his culture that he has forgotten. Zheng will also be in attendance at the film festival.

Later in the evening the festival showcases the European premiere of “Karma” by Zheng Peike and “One and Four” by Jingme Trinley starting at 6 and 9 pm respectively.

Saturday, October 22 is dedicated to Female Gazes with three films by Chinese female directors. Two of these films, “The Chanting Willows” and “B for Busy,”,are premiering for the first time in Europe.

There will also be a cooking class at Mercato Centrale Firenze the same day. The cooking class will be teaching how to prepare Chinese dumplings known as Jiaozi. Teaching the course will be local Xiaofei Hu (free entry; Reservations mandatory at debora@zhongart.it).

The last day of the festival, Past and Present, features two contemporary films, “New God: Nezha Reborn” by Zhao Ji and “A Marble Travelogue” by Sean Wang and one award-winning film from the 90s, “The Story of Qiu Ju” by Zhang Yimou. The film, which closes the festival, follows the story of Qiu Ju, a peasant woman. After her husband is disrespected by the head of the village she travels to a nearby town and city, despite her pregnancy, to save the honor of her husband and find justice. The Golden Lion, and Golden Rooster Award for Best Picture and Actress are among some of the awards this classic Chinese film has received.

The festival will also have two talks that are dedicated to discussing and comparing links between Italian and Chinese cinema following films on October 22 and 23. The talks will further explore how Italian and Chinese institutions and businesses have had success promoting their films in international markets and festivals. Speakers will include Paolo Bertolin, Liuying Cao, Stefania Ippoliti, the director of cinema at the Fondazione Sistema Toscana and Meng Xie, just to name a few.

Another event they have added to the festival this year is a “Pepakura”- Papercraft workshop for kids also at Mercato Centrale Firenze on October 23rd. Here little kids, ages four and older, can join the festival by making paper masks of animals native to Asia. (Free entry; Reservations mandatory at debora@zhongart.it). (Michela Tambasco)

The complete program of films and events can be viewed here: https://www.fanhuafestival.com/2021-firenze