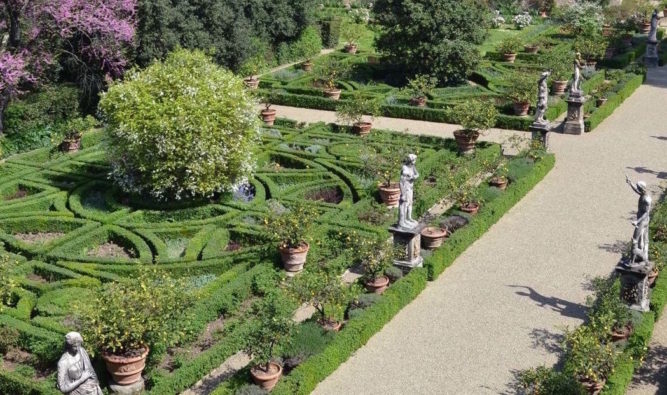 Walking down the timeless Florentine streets, attention is often drawn to a majestic doorway, barred windows with a faint view of frescoed ceilings, and wisteria vines climbing the balconies of a private courtyard.  All this and more will be available to the general public during the upcoming Open Courtyards and Gardens on May 19, thanks to the efforts of the A.D.S.I. (Association of Historic Homes).

Of special note: behind normally closed doors, a little-seen work by Sandro Botticelli (1446-1510) at Villa La Quiete will welcome visitors during “Open Courtyards and Gardens.”

In a once-a-year opportunity, the history and beauty that draws tourists to Florence will be celebrated, allowing access to over 30 historic homes, monumental parks, courtyards and wine cellars.  The opportunity to embrace unique artistic heritage and architecture is vital to preservation of these historical sites and while perpetuating the memory of Florence’s considerable private cultural legacy.

Four guided tours of an itinerary comprising several venues will be offered on the day by Città Nascosta (€5; reservations required: contact 055 6802590, 055 6801680 or info@cittanascosta.it).  The first begins at via Leone X, 8 (10 am) where guests will go on to visit the beautiful Russian Orthodox Church, Palazzo dei Pittori and Palazzo Pandolfini. Visitors can also stroll through the grand residences of Palazzo Niccolini, Palazzo Pucci di Ottavio and Palazzo Compagni, starting from via dei Servi 15 (11:30 am). Those wishing to discover the hidden green beauty of two gardens—Giardino San Francesco di Paolo and Giardino Corsi Annalena—can meet at piazza San Francesco di Paola 3 (3 pm). To finish off the day, a final tour of four lavish palaces in the Oltrarno will depart from via Guicciardini, 15 (5 pm).

Guests can marvel at the Palazzo Rinuccini and its theatre adorned with 18th century frescoes in a free guided tour run by the students of the Machiavelli Classical High School (hourly, 10 am – 6 pm). Visit the Palazzo Gondi courtyard for a wine tasting from the prestigious Tenuta Bossi estate, or tour artists’ studios open for the day at Palazzo dei Pittori on viale Milton.

Exhibitions will also display ancient artifacts housed in the Palazzo Pandolfini Garden and the art of Luciano Caruso at the Palazzo Pucci di Ottavio. On top of this, five concerts will be held throughout the day as part of this year’s musical program, in collaboration with the Fiesole Music School. Palazzo Borghese (via Ghibellina 110, 11 am) will host a viol concert; Palazzo Pepi (via de’ Pepi 7, noon) will be the setting for a saxophone ensemble. The sounds of Mozart played by flute and trumpet musicians will fill the air of Palazzo Ximenes Panciatichi (Borgo Pinti 68, 3:30 pm), and performances by trombonists are scheduled at Palazzo Budini Gattai (piazza SS. Annunziata 1) at 4:30 pm.  The final concert of the day—featuring a Verdi program interpreted by the Sacher Quartet—will be held in Palazzo Ginori (via Ginori 11) at 5:30 pm.

This edition also showcases a contemporary art project ‘ICONOSMASH,’ curated by Valeria D’Ambrosio, comprising a series of multimedia installations and performances by seven young artists amidst the historic courtyards and gardens of the Santo Spirito neighborhood. The works aim to promote a dialogue among the themes of nature, creation and destruction, and reality and interpretation.

“The Coronation of the Virgin” at Villa La Quiete by the Renaissance master belongs to the University of Florence as part of a tangled legacy.  The Botticelli panel is found in a room together with two works by Ghirlandaio. A Neri di Bicci work is found close by.

Exceptionally accessible on May 19, Villa La Quiete became a property of the Medici family in the 1400s. The last Medici ruler who donated the Uffizi Gallery to Florence, Anna Maria Luisa, made it her summer residence in the 1700s, adding the Italian-style garden.  Situated below Monte Morello, the estate was also home to a community of nuns who ran a private school of renown from 1650 to 2001.  Once closed, Villa La Quiete’s new owner became the University of Florence, which in turn sold it to the Tuscan regional government with the exception of the art hanging on the walls.

Tucked away on Via Leone X, the dramatic Russian Orthodox Church, which will welcome guests during one of the day’s guided visits, is another gem set among many in the dramatic skyline of Florence.  Its five crosses thrust up towards the heavens from five splendid spiraled domes. The whole effect is that of an architectural confection in whimsical contrast to the stoic and rather somber lines of Florence’s Renaissance palaces.

The foundations of the Russian community in Florence were laid by artists, intellectuals and wealthy aristocrats who were attracted to Tuscany in the 1800s by its cultural and artistic heritage.  At first, they were forced to build their own private chapels to minister to their spiritual needs.  The crusade to construct the first Russian Orthodox Church in the neo-Moscow baroque style on Italian soil was fully embraced in the late 1870s. The building, finally completed in the early 1900s, engendered a great deal of interest and the extravagance of the building is generally attributed to the support of the Demidoff family who, in addition to donating great sums of money, endowed magnificent furnishings and iconography to the church from their private chapel.

OTHER SITES OPEN IN FLORENCE