The winning project for the redevelopment of the Artemio Franchi stadium (Stadio Franchi), home to the A.C. Fiorentina soccer team, was recently presented in Salone dei Cinquecento in Palazzo Vecchio.

The stadium, created by renowned Italian architect Pier Luigi Nervi (✞ 1979), is one of the most significant examples of 20th-century architecture in the city.  Located in the Campo di Marte neighborhood, the Franchi stadium, boasting a capacity for a capacity of 45,000 spectators, was entirely built of reinforced concrete with a 70-meter tower in the center topped with a flag pole. The structure was innovative for its time, thanks to its projecting roof without support pillars and helical staircase.

The Artemio Franchi stadium was inaugurated in 1931 and has seen multiple renovations over the course of 90 years, most recent in 2013. To celebrate its 100th year—in 2031—is the inauguration of a new Franchi stadium. The redevelopment of the stadium will preserve the main elements of the structure, such as the 70-meter high tower, and its iconic D-shape. Besides sports events, the stadium also hosted concerts from famous artists such as David Bowie (1987), Madonna (1987 & 2012) and Bruce Springsteen (2003 & 2012) in addition to international rugby matches.

In total, 31 project proposals for the redevelopment of the Franchi were submitted for the competition. Eight finalists were chosen and presented by the jury, which included Giovanna Carnevali (architect and vice president of the jury) and Eike Schmidt (director of Uffizi Gallery).

Carnevali unveiled the project “Nervi,” by architect David Hirsch from the Arup studio, as the winning project proposal. The redevelopment involves covering the stands and tribunes with a thin metal roof above the stands of the stadium. Sustainability is implemented by the use of solar panels on the roof that will provide renewable energy to both the sports facility and the other buildings of the project. 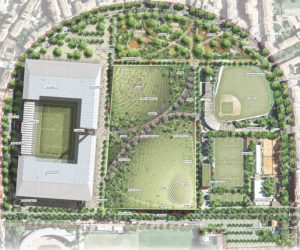 A museum for exhibition spaces and an auditorium will be added in between the space of the new and original walls of the stadium. Twenty eight new luxury boxes will be added, and 23 existing ones renovated on two floors on the side of the grandstand with dedicated access and a direct connection to the underground parking. Inside, restaurants, open-space areas and rest rooms will be built.

The Campo di Marte neighorhood will also undergo modifications. The project includes the creation of a park, accommodations, and spaces for commercial activities, both covering 5,000 square meters. Next to the stadium, the adjacent sports area will be changed to an underground complex with access to a sloping roof garden. Under the two higher ends of the garden will be located a reception, offices, shops, an indoor pool and accommodations. The artificial slope can also be used as an outdoor amphitheater, with two lookout sections facing surrounding mountains and the historical city center of Florence. There will also be a separate children’s park, facilities for a market and a skatepark surrounding the commercial area. The redevelopment of the stadium will be financed with money from Recovery Fund.

“It wasn’t easy to choose a winner. All projects respect the ability to redevelop Campo di Marte by integrating sports and non-sports spaces and maintaining functionality and specifications. […] It is a project of a Florence that is being reborn with the aspiration of becoming a model,” she stated during the reveal of the winning project proposal. The redevelopment will start in autumn 2023 and finish in 2026. Fiorentina does not need to move during the redevelopment, but there’ll be a reduced amount of spectators; 30,000 people can enter.

Those present at the Palazzo Vecchio presentation include important figures in Florence and within the sports and soccer industry, such as the general manager of Fiorentina Joe Barone; champions from the 68/69 championship; Gabriel Batistuta and Giancarlo Antognoni; the president of Coni, Giovanni Malagò and the president of the FIGC, Gabriele Gravin. Florence’s mayor Dario Nardella was in attendance as well.

UEFA’s “Football & Social Responsibility” director Michele Uva said in his speech: “[…] Florence and the Fiorentina fans deserve it. I hope that it will be a fundamental step for obtaining the European Championships in 2032.” Before announcing the winning project proposal by the jury, mayor Nardella thanked all involved parties and said: “We want to give Fiorentina a home worthy of its ambitions.”

There is, however, another match going on behind the scenes of the redevelopment of the stadium; one between Palazzo Vecchio and Fiorentina. Financing the entire project needs to be resolved. Palazzo Vecchio can provide 50% of the total funding and offer a 50-year contract for the management of the commercial areas of Campo di Marte. Another option: Palazzo Vecchio sells the building rights of the shops and hospitality industry and the proceeds will be used for the improvement and introduction of parks and other public spaces surrounding the stadium.  (ted de veer)

For complete details, watch the video.