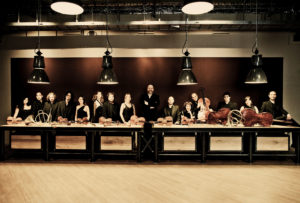 Divine worship and cultural exchange collide in the Duomo with the “Baroque Musical Treasures Between the Old and New Worlds” concert this Wednesday, July 3, at 9:15 pm. Part of this year’s O Flos Colende, an annual series of religious music concerts now in its 23rd edition, this week’s show will feature music from the 17th and 18th centuries performed by the award-winning Spanish orchestra Al Ayre Español.

The compositions are primarily by two musicians, José de Torres (1670-1738) and Domenico Zipoli (1688-1726), and emphasize interactions between European and South American cultures. Zipoli, a Prato native that moved to Córdoba (modern-day Argentina) as part of a Jesuit mission, authored several pieces that retain a certain popularity in Latin America, with the composer being a personal favorite of Pope Francis.

One selection that exemplifies the night’s theme is Zipoli’s “Ad Mariam / Zoipaqui,” which marries European Baroque style with the expressiveness of South American singing, instrumental music and dance. The text of Zipoli’s motet is written in both Latin and Chiquitano, a native Bolivian language, which provides listeners with a rare opportunity to experience a distant culture.

Al Ayre Español, making their Tuscan debut with Wednesday night’s performance, is uniquely qualified to bring this music to life. Founded in 1988 by harpsichordist Eduardo López Banzo, the orchestra specializes in restoring Baroque music, and was honored by the Spanish Ministry of Culture in 2004 for their efforts. Banzo’s group has performed in such prestigious locations as Amsterdam, Vienna and Barcelona, and will now add Florence to their list.

As with all of the O Flos Colende concerts, entrance to “Baroque Musical Treasures Between the Old and New Worlds” is free. The Opera of Santa Maria del Fiore, which organizes the series, highly recommends reservations, which can be sent to eventi@operaduomo.firenze.it (alex harrison)