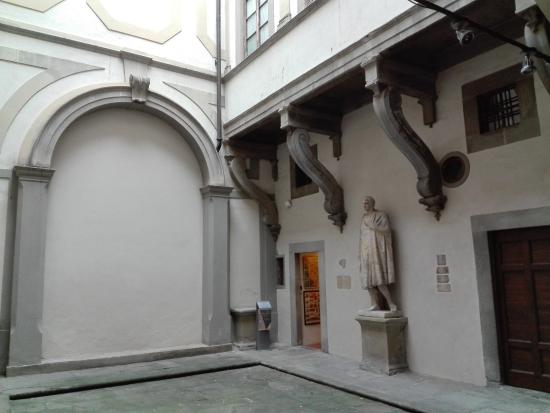 The historical ambience of Michelangelo’s house will become a performer in its own right in a weekly free concert series from July 4 to 25, organized by Musica Ricercata.

The intimate courtyard of Casa Buonarroti, the chosen stage for this concert series, is a block from Piazza Santa Croce. Though it has a fairly plain, undistinguished exterior, the residence-turned-museum is full of works by the master sculptor himself – including the largest collection of his original sketches – in addition to many of his carvings and wooden models, among them his proposal for the façade of the Basilica di San Lorenzo. Artifacts from Roman and Etruscan times are interspersed throughout the grounds as well, and the corridors are lined with artworks collected by the Buonarroti family over the years.

Pianist Gregorio Nardi will perform works by Beethoven, Liszt and Debussy on Wednesday, July 4. Nardi, an accomplished international performer, musical critic, and director, was born into an artistic and notable Florentine family. His grandfather, Piero Bargellini, was mayor of Florence during the disastrous 1966 flood. Nardi now lives in and looks after his grandfather’s house and studio, a designated “Casa della Memoria.”

The next concert, on Thursday, July 12, stars a high-powered classical duo: cellist Roger Low and pianist Wonmi Kim. Low is a graduate of Curtis and Juilliard, having debuted in Carnegie Hall. He is the former principal cellist of the New Haven Symphony Orchestra, though he now resides in Elba with his Florentine wife. Kim, a past winner of the Liszt International Piano Competition, will show her range of talent as the trans-continental program tackles an ambitiously wide repertoire.

Kim will display Debussy’s unmistakable French impressionism on the keys in “L’isle Joyeuse.” The composer’s second appearance in the program is no accident, as this year marks the 100th anniversary of his death. The duo comes together again in their concluding performance of Rachmaninoff’s Sonata in G Minor, a flawless example of the Russian romanticist’s haunting melodies.

Wagner and Brahms, two masters of romanticism, will be the focus of a seven-piece string ensemble’s recital on Tuesday, July 17. They will play Wagner’s “Siegfried Idyll” and Brahms’ Septet No. 2.

For the finale of the series, the “Chaminade Trio” will perform a distinctly French program on Wednesday, July 25. The group’s violinist, Michael Stüve, is the founder and president of Musica Ricercata, a musical group dedicated to the “rediscovery of music” that brings various periods and types of classical music to life through a diverse array of ensembles, instruments, and composers.

To round out the trio, Roger Low appears again on cello, and music critic Monique Cíola takes to the piano. The performance is bookended with the works of two French female composers: Cécile Chaminade and Mel Bonis. Another Debussy work, his early Trio in G Major, will complement the ethereal melodies of Chaminade and Bonis and help highlight the timeless works of Michelangelo standing mere feet away from the audience.

All of the concerts start at 9 pm and are free to the public, but a reservation is required. The venue can be contacted by phone at 055.241752.