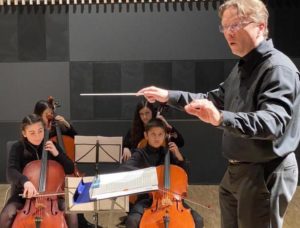 The Florence Youth Orchestra Festival headlines international orchestral concerts with free entrance in Piazza Signoria once again this July. After two years of difficulty regarding the COVID-19 restrictions, the 23rd edition returns with 18 youth orchestras from 11 countries and celebrates talent, music, and youth under the Loggia dei Lanzi which is the main venue of the event.

Began in 1999, the festival has brought orchestras from around the world in Florence. After two years of difficulty regarding the COVID-19 restrictions, the festival is renewing its mission which is to unite young people and music in the vital center of our city and foster peace, friendship, and solidarity.

All concerts are free and open to the public. For more info, call 347 589 4311, mail or access www.florenceyouthfestival.it.

The schedule for the upcoming 10 days below.  All performances begin at 8:30 pm unless otherwise indicated.

The Austrian youth orchestra, directed by Ivo Warenitsch, is made up of over 70 young performers who will interpret well-known compositions by contemporary composers of their land and the rest of the world, from Johann Strauss to Franz von Suppé.

The Dutch orchestra performs with the sopranos Karin Hertsenberge and Charlotte Kroezen, Wassel Kooij on trombone, Luca Waanders on trumpet, Merel Coster on cello, and Bram Lammertink on double bass. The conductor Carl Wittrock will lead his young performers in a program of overtures and intense lyrical moments from the works of Borodin, Puccini, Morricone, Bernstein, Custer, and von Suppé.

The Loggia dei Lanzi will again be the stage of the Youth Orchestra of Buck County, an American youth group from Pennsylvania directed by Robert Loughran. A string formation, specialized in musicals and soundtracks, will play soundtracks taken from Porgy and Bess, Nuovo Cinema Paradiso, Harry Potter, and Game of Thrones.

The Joven Orquesta de Cuenca, conducted by Manuel Murgui, performs with 70 Spanish musicians of the Pedro Aranz Conservatory and of the Ismael Martìnez School of Cuenca. The orchestra will retrace a musical journey with the compositions of Johann Sebastian Bach and Antonio Vivaldi, and end with a premiere of Murgui’s symphonic poem Roma in three movements that describe the wonders of Rome, from the Pantheon to the Colosseum.  (elif aytemiz)