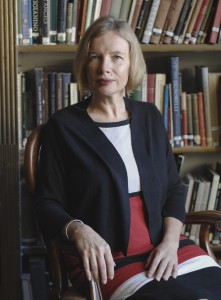 A few days before the death of Nelson Mandela, who will be forever remembered for his successful nonviolent battle against apartheid, the new director of the British Institute, Julia Race, granted an exclusive interview to Vista.

Race began to speak of her experience in South Africa, where she served as director of the British Council between 1998 and 2000.

“It was extraordinary to be there as Nelson Mandela stepped down from the presidency, and to be able to work alongside South African parliamentarians,” she said.

Race was training decision makers in how to draft legislation.  “They were the people designing the ‘rainbow nation’ under the most progressive constitution in the world,” she remembers.  A UN observer during the post-Mandela presidential elections in the townships near Cape Town, she also helped to create ties between U.K. and South African firms, and helped women setting up small businesses.

Again focusing on employable skills, she faced similar challenges as deputy director of the British Council in Egypt from 2008 to 2011, just before the Arab Spring.  Because foreign judges were not allowed to lecture in Egyptian universities, Race set up a mentoring system between women judges in the Middle East and those in the U.K.

“There, like the other places I have lived during my career [Belgium, Great Britain, Italy], I was to create dialogue between cultures.”  Her first job, for a French firm in Brussels, was assisting tourists abroad.  Later working for the mayor’s office in London, she designed a festival which celebrated and communicated the Arab world to English speakers.

Race’s connection to Italy started when, as a student at the University of Cambridge, she decided to come to Florence to take an art history course.  She always had a special interest in the visual arts in Tuscany, particularly between 1402 and 1482 and in Romance Philology.

“Education is the route to empowerment, the key to understanding cultures and paving the way to employment and a better life,” she says.

In 2017 the British Institute of Florence will celebrate its centenary.  Race comments, “It will be a good opportunity to introduce more people to the B.I. and remind them what we offer.”  The Institute was established in 1917 to foster cultural exchange between the U.K and Italy.  Known for the quality of classes offered—including Italian, English, art history, drawing and painting— the Library contains the largest collection of English literature in continental Europe (52,000 books) and hosts a well-regarded cultural program.

“My goal is to maintain the high quality of our services, and to work towards financial serenity, which is a challenge given that the Institute receives no public funding.”

Seated near a window with an expansive view of Florence’s bridges over the Arno, she paused for a moment, then said “I am enthusiastic about my job.   More importantly, I feel at home here.” (rosanna cirigliano & giulia penna)