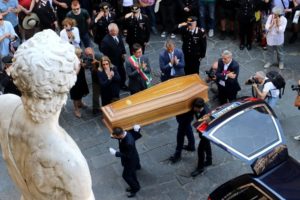 Franco Zeffirelli, a world-renowned Italian film director and opera producer, died on June 15, 2019 at the age of 96 in Florence.

To honor his creativity and his illustrious work, a public wake is being held today in the Palazzo Vecchio until 11 pm and is open tomorrow from 9:30 to 10:30 am. Along with a large crowd in attendance, the mayor, Dario Nardella, and Laura Lega, the prefect of Florence, were also present to show their respects. Zeffirelli’s two adopted sons, Luciano and Pippo, were given the honor of putting a scarf on the coffin of their recently departed father. Zeffirelli’s funeral will be held tomorrow, June 18, at 11 am in the Duomo. He will be buried in the cemetery delle Porte Sante next to the Basilica of San Miniato.

Born in 1923 in Florence, Franco Zeffirelli rose to success after he was recognized for his amazing work of Romeo and Juliet (1968). This, along with his other acclaimed work, La Traviata (1983), secured him his first two Academy Award nominations. He is also known for The Taming of the Shrew (1967), Jesus of Nazareth (1977), and Tea with Mussolini (1999).

Along with being an accomplished film director, he was also known for his opera productions. His production of Tosca (1964), with Maria Callas and Tito Gobbi, and Lucia di Lammermoor (1957) became prominently known around the world. His latest work, a new rendition of La Traviata, will be presented at the Arena of Verona on June 21.

Events throughout Florence have been put on hold to honor Zeffirelli’s legacy. On the day of the funeral itself, businesses in the city will close for several minutes at the start of the ceremony as a city-wide moment of silence and mourning. (sierra case)

To read more in Italian visit La Repubblica here. To see a photo gallery dedicated to the life of Franco Zeffirelli, see here.