Movies in English at ‘Cinema in Villa’ 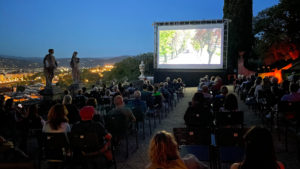 Cinema in Villa returns with a selection of new releases and timeless classics at the Villa Bardini from the first week of July to August 21.  The summer cinema experience on the Belvedere Terrace offers guests a venue cooler than downtown Florence complemented by a breathtaking view of the city.  Screenings start at 9:15 pm.

In its third edition, the Cinema in Villa returns with some special evenings focusing on renowned Italian directors like Federico Fellini, Pier Paolo Pasolini, and Elio Petri, with showings accompanied by English subtitles. A number of American and British movies in the original language are also scheduled.

The program is divided into six sections comprising “Love and Psyche,” “Cinema and Literature,” “Family Cinema” (which provides free admission every Thursday for families with a reservation); Original Sound in Villa,” “Original Sound Special Event,” and “The Hits of the Season.” Admission is €5.  Tickets can be purchased at the Villa Bardini or on www.villabardini.it and www.cinemainvilla.it in advance.

The following movies will be shown either in English or, in the case of an Italian film, accompanied by English subtitles.

A special event will take place on Monday, August 1: the documentary “Babenco: Tell Me When I Die,” winner of numerous awards, will be shown in the presence of the director Bárbara Paz.  (elif aytemiz)