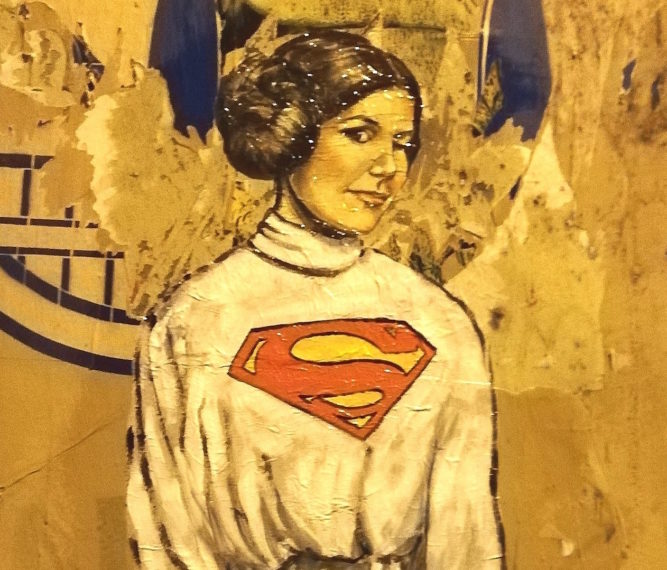 Powerful female images scattered throughout Florence shine life back into boarded up windows, all signed by the mysterious “#Le”. Found on Instagram as @lediesis, the artist’s work illustrates eight inspiring female icons with street art depicting the women as superheroes as a tribute to International Women’s Day on March 8.  From artist and influencer Frida Kahlo, Egyptian queen Nefertiti, astrophysicist Margherita Hack, to actress Sophia Loren, the images celebrate diversity and the unique strengths of different women.

Seekers of the art can discover the strategic placement, such as the Star Wars rebel leader Princess Leia, located on the wall of the ex-Supercinema (via dei Cimatori) where the movie was premiered.

Though separated by time, culture, and race, these incredible women, mere street art amongst a city of Renaissance relics, are united by their strength and courage in the face of adversity.

There are other special events that day in honor of women as well. One is a protest for rights and equality of all women fighting sexual and domestic abuse, economic inequality, workplace discrimination, and reproductive restraints.

Speakers, music, and poster making, will take place in piazza Santissima Annunziata at 3:30 pm, and later at 5:30 pm, a march from the square to Santo Spirito.

The spirit of the organization “non una di meno” meaning “not one less” heads the march, calling for support for all women, of every nation, race, and place in society. The demonstration means to call attention to sexism, racial prejudice as well as violence is scheduled to take place in 40 Italian cities, and all across the globe.

The celebration of women will continue with young, female conductor, Anna Rakitina, directing a performance at the Teatro del Maggio (piazzale Vittorio Gui) starting at 8 pm. The show will include a musical composition by French Lili Boulanger, born in 1893, who was the first female to receive the Prix de Rome prize.

Also featured are Venetian Gian Francesco Malipiero’s Baroque symphony of the Sea, and symphony no. 6 by Franz Schubert. These 3 composers of France, Italy, Austria have the similarity of all being in their twenties when their pieces were written.

Reduced ticket prices will be available for all women attending the concert.

March 9 & 10: As a special gift, Florence’s Aeroclub “Luigi Goretti” is offering a free “Mimose” flight in the sky for women from 9 am to 1 pm and 2  to 5 pm. Those interested can write an email to seeteria@aeroclubfirenze.it with their name, place of birth, and telephone number. The first 100 to reply will receive an email with instructions on when to arrive.  (nicole grant)