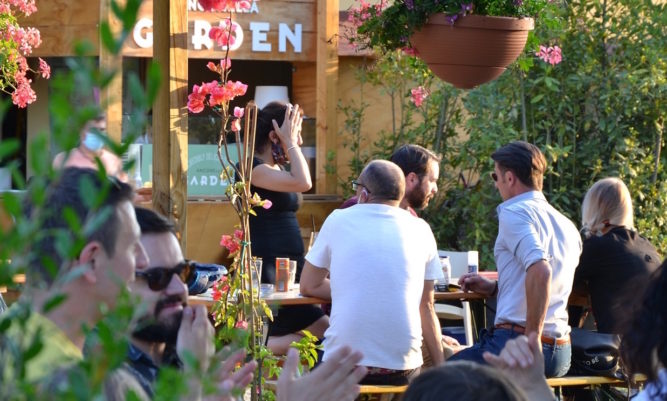 The Anconella Garden promises an end of the month dedicated to theatre and music. All events will be held in the park, the “polmone verde” (green lung) of Florence on via Villamagna 39/d.

You can still catch the end of this month’s theatre performances on August 25 and the following evening on August 26 at 9 pm which will mark the close of the program. The original drama “Cronache di Firenze” directed by Fiammetta Perugi and Leonardo Lenzini will be presented on Tuesday at 9 pm. The musical will tell the stories of three Florentine folk fables in three different spaces in the city; each scene will include song and dance as is tradition.

The next evening will see another theatrical performance titled “Questo folle lockdown” that will consist of various monologues performed by students from the APS laboratory. Each student will take on a character with a psychological or mental illness, portraying how those who suffer from mental health issues have been impacted during the lockdown, as well as confront taboo subjects such as depression and loneliness that many have felt these past months — if not before.

A festival entitled “Roots” (Radici) will take place in the park from August 27 to 30, featuring musicians from all over Italy on stage to offer their brand of jazz, folk and Indie music, progressive rock and more.  All events, which begin at 7 pm, have been organized according to current health protocols.

“Roots” will kick off with singer Paola Massoni on Thursday, August 27; she will be followed by percussionist Katia Pesti and singer Gabin Dabirè and world music, and later on by singer-songwriter Piero Lanini who blends tango with traditional Neapolitan sounds in his compositions.  Indie and alternative rock will be the focus on Friday, August 28.  Irish folk music opens the night on Saturday, August 29 before an alternative rock concert.  The nights will come to a close with an appearance by the “Femin Ridens” who will be offering a unique mix of folk and medieval music. Singer-songwriters and Indie rock will again be showcased on Sunday, August 30.

Despite safety regulations, the Garden wants visitors to enjoy entertainment including live concerts and theatrical productions, as well as yoga and presentations on literature and art. From 5 pm until late evening you can stop by Anconella for a quick snack, aperitivo, drink, or meal. Visitors can choose from a wide range of options from a menu curated by chef Alexandra Sala whose specialty is fusion food including Japanese street food, tacos, pizza, as well as and vegetarian options. Beginning at 7 pm, guests can also enjoy finger food all made from seasonal vegetables.

The garden reopened for their summer season earlier this summer and will continue to offer live music, art installations, and delicious food until the conclusion of the season on September 30. All of this programming is made possible by a collaboration between Diramazioni Festival and CambiaMusica Firenze with artistic direction by Costanza Mascilli Migliorini, a multifaceted young Florentine artist, writer, musician, actress, and director.  (elizabeth berry & rosanna cirigliano)