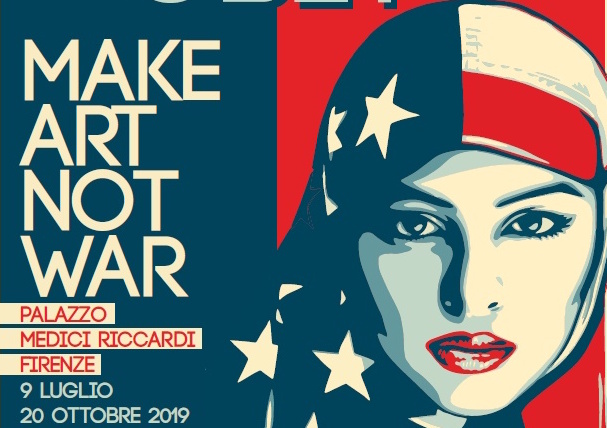 Considering the current political climate in the United States, the knowledge that Barack Obama was President a mere three years ago may feel surreal. Despite changes that have taken effect since his term ended, it is curiously easy for people all over the world to instantly recall the imagery that accompanied his campaign. The 2008 red, white, and blue “HOPE” poster with his countenance is indisputably iconic.

Shepard Fairey is the street artist, activist, and graphic designer behind this work, and now his art is on display in Florence. The collection consists of poster-size pieces of human faces, as well as street-art-size, floor-to-ceiling works depicting more abstract patterns. The style is reminiscent of Andy Warhol’s — opposing, highly saturated colors in template design. The black walls contrast with each illuminated frame, augmenting the already intense energy of the images.

Among the posters is one almost as emblematic as “HOPE” — the “We the People are Greater than Fear” image. The latter, in contrast to the former, was released at the time of Trump’s inauguration. It depicts a woman staring straight at the viewer, bearing an American flag hijab. Her gaze is direct and unflinching. The portrait is blatantly politically charged. It became symbolic and widespread when it was published, full size, on a page of the Washington Post newspaper, thanks to a Kickstarter campaign that funded the endeavor.

It goes without saying that Fairey, a South Carolina native known for clothing line “OBEY” is, like his art, politically engaged. It was during his time at the Rhode Island School of Design that he began to create street art and stickers as something to share with friends — not something that he expected would gain international momentum. The fact that these images trigger recognition for so many people, all over the world, is not to be undervalued.  (emma hempstead)