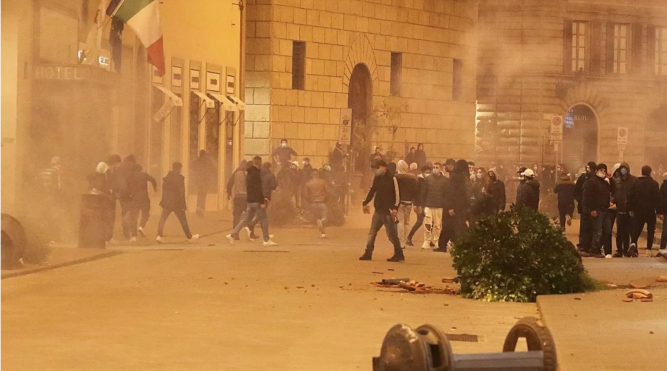 During the unauthorized evening demonstration against recent social lockdown pandemic measures lasting four hours in downtown Florence on the evening of October 30 saw participants throwing Molotov cocktails, smashing shop windows and squad car windshields.  They also knocked over flower planters placed strategically to deter terrorist attacks and smashing video surveillance cameras, often using large stones from open work sites, which were also aimed at the police, who had earlier barricaded piazza Signoria to successfully prevent access.  From city hall in the same square, Mayor Dario Nardella has warned earlier in the day about the impending invasion of Florence by “neo Nazi sympathizers in addition to anarchists.”

The number of demonstrators–many of whom were young people converged on Florence from towns throughout Tuscany–were estimated to be 1,000 and were concentrated mainly from piazza Santa Maria Novella, Borgo Ognissanti to piazza Strozzi and via Calzaiuoli. Sirens wailed while the crowd continued to yell.  A day later, four–all under the age of 30–have been arrested and are jail in Solliciano while charges were pressed against another 20.  Ten police officials were hospitalized. (rosanna cirigliano)