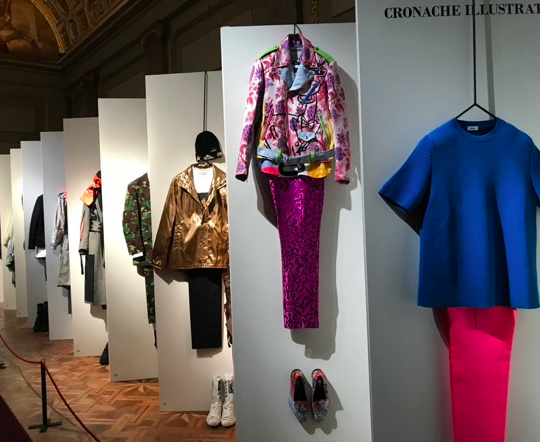 The Pitti Palace museums and the Boboli Gardens are offering an open day with free access to its treasures on Tuesday, August 27.  The event will celebrate the anniversary of the founding of Grand Duchy of Tuscany, precursor of today’s region, on the date in 1569, when Cosimo I de’ Medici was crowned Grand Duke.  This was the immediate sequel to Florence’s conquest of Siena, which was the obstacle in the creation of a unified territory.  The Grand Duchy of Tuscany was given equal status with other European states.  When the Medici dynasty became extinct in the 1700s, rule of the Grand Duchy passed to their heirs, the Hapsburg Lorraine family, who ruled until the unification of Italy in the 1861.

Thanks to the this commemoration, from 8:15 am to 6:50 pm at no charge, guests can tour:  the Palatine Gallery; the Fashion and Costume Gallery; the Modern Art Museum: the Porcelain Museum; the “Treasures of the Grand Duke Museum” (formerly the Silver Museum) as well as the Boboli Gardens (the garden will remain open until 7:30 pm).  The visitor can browse and appreciate Renaissance paintings, antique sculptures, sumptuous period fashion and jewelry, artworks from the late 19th and early 20th centuries as well at the formal Italian garden complete with statues and fountains, that lies behind the complex.

Current exhibitions included a display of tapestries created during the reign of Cosimo I de’ Medici, and the show A Short Novel on Men’s Fashion at the Fashion and Costume Gallery.

Inaugurated to coincide with Pitti Immagine Uomo’s 96th men’s fashion week (June 11-14, 2019), the Pitti Discovery Foundation has collaborated with the Uffizi Gallery to curate a collection of roughly 500 pieces worth over 300,000€ that represent the evolution of menswear. Entitled ‘A Short Novel on Men’s Fashion’, the exhibition gathers work by 110 designers from all over the world, from as early as the 18th century until current collections, displayed in the privileged setting of the Pitti Palace.

‘A Short Novel on Men’s Fashion’ stretches beyond the confines of fashion, also drawing art, architecture and literature into the display. The pieces are grouped by mood, rather than chronologically, and then displayed in a room that enhances the atmosphere exuded by the outfits, a process through which the Pitti Palace becomes so much more than merely the space that accommodates the collection.

The first room, entitled ‘Glossy Paper’, is decorated with textured red wallpaper, boasts high ceilings coated in ornate gold work and two grand beaded chandeliers. The 10 pieces in this one room alone span from 1780 to 2017, of an array of textures and styles that nonetheless all tie into the decor of the room, and converse with one another. An elegant Roberto Cavalli red jacquard corduroy suit from 2007 lies next to an edgier 1994 Gianfranco Ferré red leather biker jacket with patches and embroideries. The pieces are connected by the rich colours and textures of their surroundings and the way in which they both embrace their aesthetic value.

They in fact come to encapsulate a key evolution in menswear, that is a reversion to indulging in appearance and frivolity, as men’s fashion did in the 18th century. This takes on greater significance still as the visitor moves to the next items displayed in a glass case, an Italian manufactured tailcoat, pair of trousers and waistcoat from 1780 in the same vibrant red, with gold embroidered details. On the surface these pieces clash jarringly with those by Cavalli and Ferré but in fact they hold at their core the very same sense of artistry and creativity. As such, the exhibit demonstrates the stylistic evolutions in menswear while shedding light on the underlying constancies in the spirit behind fashion.

In each room, the clothing is displayed to this same effect, exploring different atmospheres. From ‘Travel Journals’ that presents soft-coloured smart ensembles from the 90s to the present day, to ‘Diary of an Explorer’ that showcases a series of outerwear and skiwear fit for an intrepid expedition. Then a selection of white and cream looks entitled ‘Blank Page’ held in one of the few rooms that lacks colour in its decor offers a stark contrast to ‘Illustrated Chronicles’ that proudly shows the more garish pieces of the collection in a room with an ornate ceiling of gold detailing and colourful frescoes. One of these is an eye-catching bright pink patterned Moschino ensemble that hangs alongside a particularly fitting quote from Barbey d’Aurevilly’s ‘Le Constitutionnel’ that speaks of casting aside the ‘’black uniform worn for too long’’ in favour of dressing in ‘’fanciful costumes’’.

The entire collection is interspersed with a myriad of literary quotes from great writers such as Scott Fitzgerald, Oscar Wilde, Charles Baudelaire and Pier Paolo Pasolini, all following the theme of clothing and dressing. The collection’s curator Olivier Saillard identifies various parallels between the world of fashion and that of literature, likening a piece of clothing to a book waiting to be opened, only completed when worn, just as a book is only completed once read.

Saillard compares items of clothing – trousers, a shirt, a jacket – to vocabulary, a collection of words that are limited in number but from which can stem an infinite number of stories and novels. He sees this endless possibility in fashion and seeks to enact it through the sheer variety of the pieces that make up the collection. Diverse not only in the eras they’re from, but also the number of designers and styles included.

A passage from Virginia Woolf’s ‘The Voyage Out’ provides the key inspiration for how to display the clothing. The quote reads: ‘In sleep he looked like a coat hanging at the end of a bed; there were all the wrinkles, and the sleeves and trousers kept their shape though no longer filled out by legs and arms. You can then best judge the age and state of the coat’. With this image in mind, Saillard decides to lay the clothes out on raised surfaces on the floor that recall open books or hang them from hooks, a most unusual decision for a fashion exhibit, that would typically make use of mannequins. Saillard reasons that allowing the clothing to hang or lay almost haphazardly not only relates more accurately to the way that real men wear and then discard of their clothes when they undress, but also restores a poetic sense of movement and spontaneity to the pieces.

Curated as a celebration of 30 years of Pitti Immagine Florence fashion fairs and put together in memory of Marco Rivetti, director of Pitti Immagine from 1987-1995, this exhibition marks an important milestone in menswear and Florence’s role in international fashion. Confronting this, Pitti Immagine and the Uffizi Gallery have shown in this comprehensive journey through men’s fashion the artistry behind menswear that is worth valuing, applauding and understanding. (saskia brown)