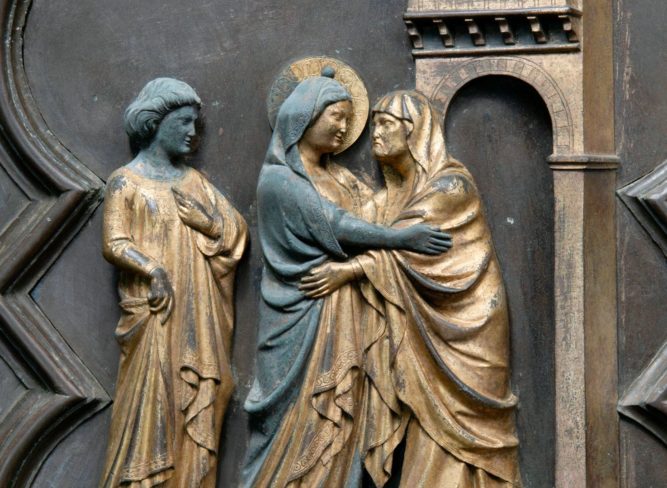 In an initiative that has been extended through February 29, residents of Florence, the city’s metropolitan area and the province of Florence can participate in free guided visits on Saturdays (5 and 6 pm) and on Sundays (10, 11, 5 and 6 pm) of the South Gate of the Baptistery at the Opera del Duomo museum (Cathedral Museum) and also visit the entire complex at a reduced admission of €6 instead of €18.

The South Gate, created in 1330, a century before the Gates of Paradise, weighs eight tons and is 16 feet tall. Pisano’s gate is composed of 28 panels, 20 of which tell the story, from left to right, of St. John the Baptist, patron of the Baptistery in the city of Florence. The artist signed the work on the upper part of the door.

Restoration of the Baptistery doors, all created between 1330 and 1452, brought to light the bronze and gold gilding and intricate details that were obscured from people touching them, dirt, and oxidation, and damage from the 1966 flood. The restoration was done either by hand or by the use of lasers, which can cut through certain materials, depending on what needed to be removed. The Gates of Paradise, by Lorenzo Ghiberti, were the first in the cycle of restorations, which took 34 years to complete: 1978 to 2012. The North Gate, also by Ghiberti took only two years, from 2012 to 2015. The most ancient of the doors, The South Gate, by Andrea Pisano, one of Giotto’s greatest disciples, was the last to be finished, from 2016 to 2019.

The doors currently on the Baptistery are copies of the originals; it is now necessary to keep the doors behind glass within the Opera del Duomo museum to preserve their beauty and history.  (alex reilly)