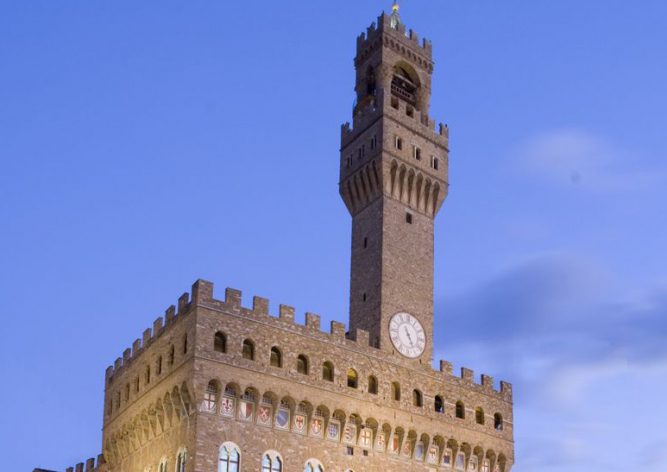 The cornerstone of Palazzo Vecchio, Florence’s city hall and seat of power down the ages, was laid on February 22, 1299, exactly 722 years ago today.  It was to be built on Roman ruins and the razed buildings of the Uberti family, who, in the 13th century were politically on the wrong side of the fence.

By the 1290s, Florence ranked among the five largest cities of Europe with a population of 100,000, and new city walls were going up to protect the residents. The woollen cloth trade and banking brought work to the masses and spectacular wealth to merchants, and city fathers commissioned new building projects on a breathtaking scale.  These included the Palazzo Vecchio — first known as the Palazzo dei Priori and later as Palazzo della Signoria (literally, the palace of the lords) — and a new cathedral.  The man entrusted with designing both of these was Arnolfo di Cambio, a contemporary of Giotto, who was revolutionizing art at that time.  The city hall building was to be decorated by such Renaissance greats as Ghirlandaio, Vasari, Michelangelo and Donatello.

Besides being a renowned sculptor (his work is included in the Cathedral Museum/Museo dell’Opera del Duomo) collection, Cambio was also the architectural engineer responsible for the new city walls, completed in 1333.   It is no accident that Arnolfo’s town hall and city walls share architectural features of a defensive nature.  Clearly, the design of Palazzo Vecchio resembles that of a fortress, with its bold, rusticated stonework, its high battlements and soaring crenellated tower.  The defensive capabilities of the building have been put to test by rioters and siege down the ages.  One of the most noteworthy consequences of a 16th century clash was the rapid descent of a large, wooden bench.  Hurled from an upper window, it took David’s left arm clean off.  Michelangelo’s iconic statue was located in Piazza della Signoria until the 19th century, when it was moved to the Academy Gallery.

There are also original refined details, such as Gothic-inspired pointed windows and painted insignia.  Florence was then a republic ruled by members of guilds, which would be followed by the long reign of the Medici family, from the 1400s to 1743.  For many years, the family lived in Palazzo Medici near San Lorenzo, until Grand Duke Cosimo de’Medici, wife Eleonora da Toledo and their children moved to “Palazzo della Signoria” in 16th century.  Later, Eleonora decided to move the family to the Pitti Palace, also because of the spacious Boboli Gardens out back.  It was then that the former “Palazzo della Signoria” was renamed “Palazzo Vecchio,” the “old palace.”

From 1865 to 1871, Palazzo Vecchio hosted the Italian parliament, during the time when Florence was capital of Italy.  Still today, it is the headquarters of city government and home to splendid Renaissance halls that can be visited along with its museum.