Pino’s, A Great Place for Lunch 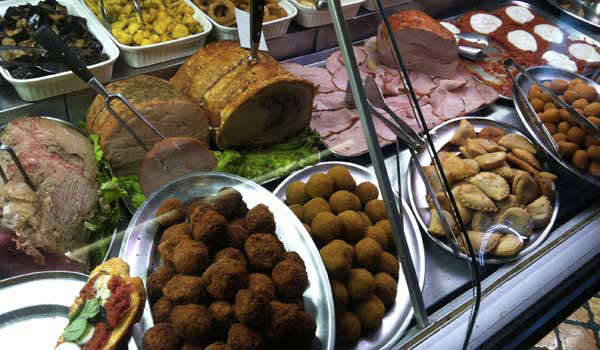 When one thinks of Florence, two things come to mind most often: art and food; however, these two are often one and the same.

Few recognize this better than Pino Palmiero and his wife Antonella, the proprietors of Salumeria Verdi, also known as “Pino’s Sandwiches.”  The deli is always abuzz with hungry students and locals who stop by to eat one of Pino’s handmade sandwiches or one of Antonella’s main dishes in the two rooms with ample seating. Unlike many places that have affordable lunches during the workweek, Pino also serves food on Saturday.

Though Salumeria Verdi has been open for over 20 years, Pino has been making sandwiches for only 10 after students showed desire for a sandwich menu.  Taking the recommendation to heart, Pino began to “invent the blends and different tastes” using only typical local Italian ingredients. If one of his creations was delicious, it was put on the menu; if it was not it was thrown away and he began again at step one.

With names like “La Bomba,” “Turkey Best” and even a few who take their namesake from customers, one can imagine that Pino is a master at his trade.  The fact that he truly cares about his work is evident by the 14 hours he spends per day in his deli.

One of the more intriguing sandwiches, aptly called “The Best,” is an amalgamation of hand-sliced roast beef and smoked cheese, cooked spinach, peppers, eggplant and Pino’s special hot sauce that he prepares every morning. These ingredients are all stacked between focaccia bread and warmed to perfection on a panino press.

The main courses are just as excellent.  One such dish is tender, thinly sliced roast pork (arista) accompanied by a red wine and herb sauce that enhances the flavor rather than masking it.

For only €3.50, those on a budget can dine on a filling and delectable sandwich.  Pasta is the same price, while a main course is €5 with a side dish.  Pasta, a side dish, and a main course are €8.