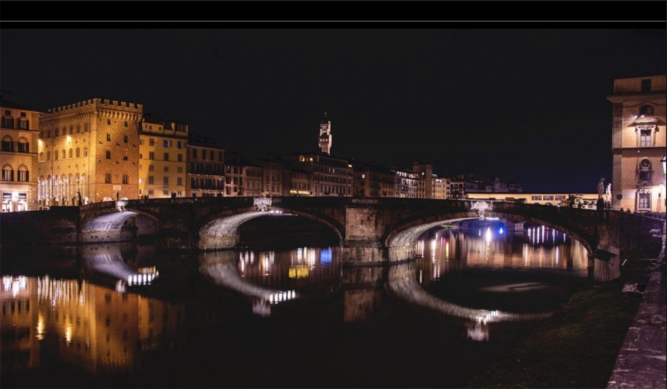 Ponte Santa Trinita, which owes it stunning design to Michelangelo, received a new permanent LED lighting system during the holidays to better illuminate its artistic beauty by night.  Warm, white light now radiates from 12 strategic spots to highlight architectural details such as the marble friezes — the horizontal sculpted decorative elements — and allegorical statues of the Four Seasons, one standing on each corner.  Thanks to the new installation, two medieval buildings — Palazzo Spini Feroni and Palazzo Vecchio, Florence’s city hall — glow softly in the background.

The 16th century bridge built by Ammannati that exemplifies High Renaissance design was mined and blown up by the retreating German army on August 3, 1944, when the statues of the Four Seasons ended up in the Arno river.  They were found, all except for the head of Spring (Primavera), prompting the Florence office of the U.S.’s Parker Pen company to print and distribute a “Missing — Reward Offered” poster throughout the city.  Ponte Santa Trinita was reconstructed “where it was, as it was” in 1958 with what  pietra forte stone could be recovered from the Arno, with additional stone quarried from the original Boboli Garden quarry, reopened to provide the material.  Despite the 3,000 dollars offered, the head of Spring (Primavera) was not located until 1961 when it was dredged up by a visitor from Northern Italy, who was compensated for his efforts.  (rosanna cirigliano)