The city is shining brighter than ever thanks to Florence Light Festival (also known as F-Light), resumed for the holidays after a year’s pause due to COVID.  The F-Light Festival is featuring projection mapping with videos that light up many iconic locations in Florence until January 9, every evening from 5:30 pm to midnight. The theme of this particular festival is “Reflections.”  In conjunction with F-Light, an art exhibition called ‘WONDERFUL!,’ showing the work of artists under the age of 40, is also currently being held at the Sala d’Arme of Palazzo Vecchio (details below).

The facades of the Galileo Museum and the Chamber of Commerce is presenting imagery from the Divine Comedy, with scenes from the work as a mirror to the human condition, as the grand finale to the year that celebrated Dante Alighieri.  The basilica of San Lorenzo is hosting a stylistic collage of mythological figures such as Narcissus and how it, along with many other stories, continue to be relevant up to the present day. Visual art will shine on the surfaces of the Istituto degli Innocenti in Piazza Santissima Annunziata, representing mankind’s new ability to control large amounts of data and artificial intelligence in the modern age. Other locations with colorful projections that are part of the festival include Ponte Vecchio, Palazzo Medici Riccardi, the Museo Novecento, Forte Belvedere, the Mercato Centrale and the Basilica of San Miniato al Monte. Surrounding gates, doors and towers such as Torre della Zecca, surrounding all of these plazas will be lit up as well. 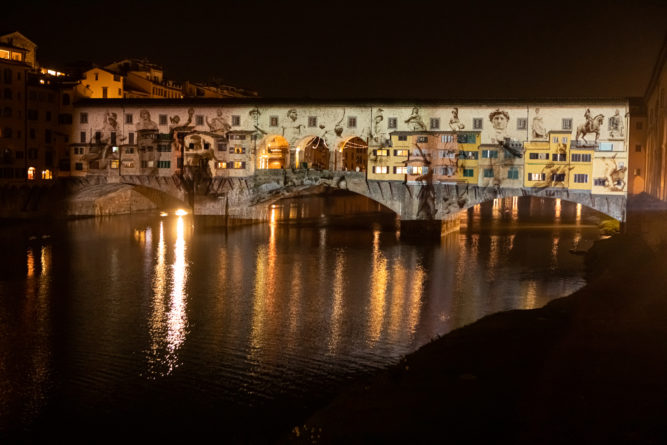 Every other district of Florence aside from the historic center will also see its fair share of lighting as well. District 2 has a tree illuminated in Piazza delle Cure and a large star design can be found in Settignano. District 3 has installed luminous installations in Gavinana’s Piazza Bartali and Piazza Acciaiuoli, Galluzzo. District 4 has a lit-up fountain in Piazza Paolo Uccello, while a bright star appears in the Park of San Donato in District 5.

Other landmarks lit up nightly include the bronze David statue in Piazzale Michelangelo, the facade of the Basilica of Santa Maria Novella and the bell tower of Badia Fiorentina.

The Sala d’Arme of Palazzo Vecchio will be collaborating with F-Light by hosting the ‘WONDERFUL!’ exhibition through January 12. This event, organized by Museo Novecento, is part of the response on the part of the city of Florence designed to help a generation of young artists who struggled because of the pandemic. The display is the result of a competition which saw 290 artists apply. Four won a one-year scholarship for their work and as a result their videos and installations are enriching the holiday experience during the Florence Light Festival.

These winners include Binta Diaw, who studied in the Brera Academy of Fine Arts in Milan. She creates visual works that comment on social phenomena and explores topics such as migration, notions of identity and the female body. There is also Riccardo Giacconi, who studied in the IUAV University of Venice. He explores the mediums of writing and filmmaking to tell his stories, which has seen him exhibit his work in many corners of the world. Marco Giordano, who has studied in the Academy of Fine Arts in Venice, brings his contemporary art to this year’s exhibition as well. He specializes in contemporary displays and performative art that proves elusive to many viewers. Margherita Raso brings her extensive experience with contemporary art as the final guest of the WONDERFUL! exhibition. A graduate of the Brera Academy in Milan, she combines both crafted displays and different environments to invoke specific reactions in the viewer.

The exhibition will be running until January 12, and admission is free to all visitors on weekdays (Monday through Friday) from 2 to 7 pm, and weekends (Saturday and Sunday) from 11 am to 7 pm. Green Pass and a mask is required for entry (nelson matos)