Review of the ‘The White Crow’ Now Playing in English 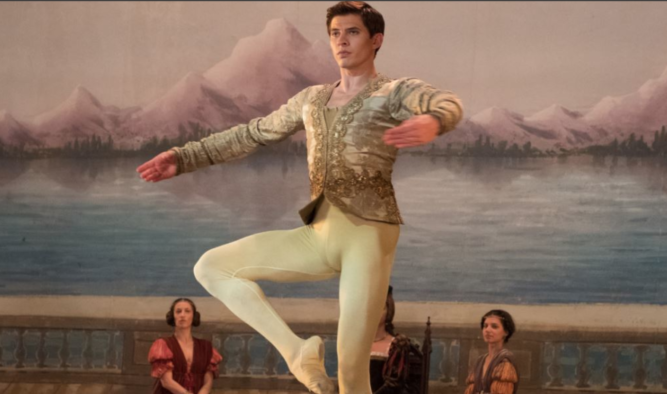 Ralph Fiennes’ film about famous Soviet ballet dancer Rudolf Nureyev begins by explaining that its title, The White Crow, comes from a Russian expression for ‘outsider,’ an unusual, extraordinary person that is unlike the others. The choice is a poignant one — hold it in your mind, because it is the key that unlocks the narrative. The story centers around Nureyev’s defection to the West, and Fiennes interweaves three periods of his life in search of his reason for doing so. The title is his answer.

The man we spend two hours with is arrogant, driven, abrasive and talented. He detests rules and constraints but rigidly adheres to his own code, unapologetically inflicting his will upon the world. He entered the world of high art from an impoverished, rural background, something he carries with him as both an inspiration and an insecurity. Through scenes from his difficult childhood in Ufa, his teenage years studying ballet in Leningrad (modern-day St. Petersburg), and his fateful trip to Paris in 1961, Fiennes shows us Nureyev as the ultimate outsider, as if the words ‘white crow’ were etched on his soul.

In one scene, French dancer Pierre Lacotte (Raphael Personnaz) describes Nureyev as technically imperfect, at times even clumsy, but possessing an energy that dominates the stage. This description works just as well for Oleg Ivenko’s performance in the title role, as the first-time actor has a dominating presence on screen that compensates for his lack of emotional range, made all the more noticeable by the nuanced work from the supporting cast. Fiennes’ Alexander Pushkin has a layered softness that suggests the inner life Nureyev is noticeably lacking, and Adèle Exarchopoulos’ Clara Saint subtly shifts from feeling to feeling in a way that makes Ivenko’s angry tirades seem forced. While these characteristics fit the film’s depiction of Nureyev as straightforward and fiercely passionate, scenes dedicated to more complex subjects, like sexuality, end up underwhelming.

Luckily, this extended look at the inner workings of a young Nureyev pay off in the film’s airport climax, when the protagonist is faced with the choice to defect and control his destiny or return to the Soviet Union and remain connected to his home and his people. The individual vs the collective, the essence of the ideological struggle that defined the Cold War, is thoroughly explored in each of the three time periods, and the tension of this being boiled down to one decision is gripping. Because the film acknowledges Nureyev will defect in its opening scene, Fiennes cannot rely on the outcome of the plot to engage his audience, and all credit to him for constructing a satisfying finale on theme and character alone.

In terms of direction, one of the film’s greatest strengths is its meditation on the nature of art, and Fiennes frequently surrounds his protagonist with various forms of beauty to put them in conversation. This is seen most explicitly in Nureyev’s constant trips to museums to study painters and their works, but also in the way he is framed against architecture, particularly the iconic buildings of Paris and colorful facades of St. Petersburg. Théodore Géricault’s The Raft of the Medusa is given an extended look in one of the movie’s most pregnant scenes — though a later moment explicitly discussing it undercuts some of the mystique. The White Crow would have benefitted from leaving more things unspoken, trusting us to put the pieces together ourselves, but its exploration of art’s place in a politicized world is interesting enough to hold the viewer’s interest regardless.

Viewers willing to overlook its flaws will find quality work in The White Crow, particularly the way it eschews the formulaic desire to recount the entire life of its subject in favor of studying the inner workings of a remarkable individual. Anyone who expects to be drawn in by the protagonist, however, will find themselves chasing after someone so far on the outside at to resist identification entirely. (alex harrison)