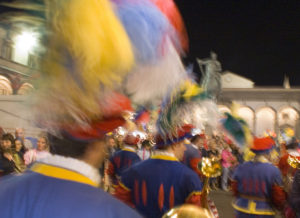 History provides the cornerstone, like the one placed on September 8, 1296 for the Florence Cathedral (Duomo), underlying Florence’s annual Rificolona (Feast of Lights) festivities.

During the Renaissance, Tuscan farmers and shepherds would arrive in Florence on the evening of Sept. 7  Often traveling from the countryside and mountains at night, lanterns (rificolone) provided visibility for their path. The pilgrims would congregate in Piazza Santissima Annunziata (Holy Annunication square), dedicated to Mary, and after religious observances, hold a market on September 8.

Apart from the actual participants, little has changed today.  Hand in hand with their parents, Florentine children walk through the streets carrying candle-lit paper lanterns (known as rificolone) when darkness falls on Sept. 7.

Free workshops where kids can create their own handmade rificolona will be held at the Innocenti Museum (piazza Santissima Annunziata) starting at 3 pm and at the Mercato Centrale near San Lorenzo beginning at 5 pm.

Actual Rificolona festivities on Saturday start at 3 pm, when a procession will begin to walk to Florence from the sanctuary of Santa Maria dell’Impruneta, one of the most ancient and important Marian shrines in Tuscany.  The church’s Madonna dell’Impruneta icon, which was carried to Florence’s Santa Felicità church in medieval times, is believed to have saved the city from the plague.

In commemoration, once again this year the procession will stop at Santa Felicità (7:45 pm) before walking to Piazza San Giovanni across from the Baptistery (9 pm), where residents and their kids will join in.  Illuminated by rificolone, the procession will proceed down via de’ Servi to Piazza Santissima Annunziata.  There, city officials will give speeches followed by live music and entertainment.  The church of Santissima Annunziata will remain open from 9 to 11 pm.

Rificolona celebrations will continue on September 8 with a children’s event hosted by the Rowing Club (Società Canottieri) on Lungarno Anna Maria de’Medici near Ponte Vecchio, starting at 9 pm.  Entertainment will be provided on lawn and prizes will be awarded to the prettiest homemade rificolona.  A parade of boats will sail up and down the  the Arno river, propelled by hand and glowing by candle power, proudly displaying the paper lanterns submitted in the contest along with their makers.  (rosanna cirigliano)