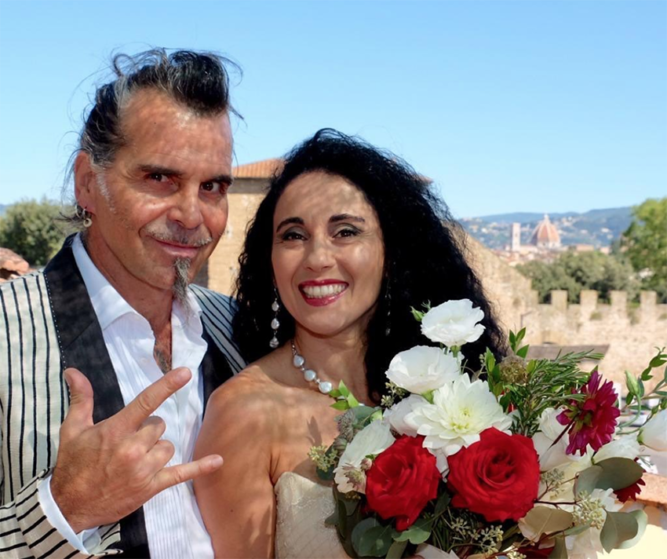 Introduced by a friend, the couple has been together since 2016. They had kept their relationship out of the spotlight, but for the wedding they made an exception and announced the big day on Instagram.

Piero Pelù was born in Massa but grew up and is a resident of greater Florence metropolitan area; his bride is Foggia, a city in  the souther region of Puglia.  Pelù had never married before; he has three daughters, by two different companions: Greta and Linda (born in 1990 and 1995), and Zoe (born in 2004). He has also recently become a grandfather. Even though the music artist said that he didn’t believe in marriage, Gianna Fratta seems to have changed his mind.

Arriving to the ceremony in an Alfa Romeo, the bride, 46,  and groom, 57, got married at Palazzo Vecchio, surrounded by beautiful decorations. The mayor of Florence, Dario Nardella, officiated at the ceremony.

Posing together for the first of their wedding shots, the pair are so different, but were united by smiles on their faces. “Welcome Gianna, a sensitive, rational and hard-working woman, to my /our tribe. We are in for a wild ride, can’t wait to start our life together!” – shared Pelù on Instagram. The singer decided remain true to his style and instead of wearing a suit with a tie, he preferred a rock look included an open white shirt, striped jacket and messy hair. Loose curly hair style touching her shoulders, Gianna chose a more classic look, wearing a cream colored strapless dress, opting for natural smokey eye makeup with a red lipstick that perfectly matches her voluminous bouquet of white and red flowers.

Piero Pelù is an Italian singer, songwriter and artist of mainstream rock scene. Known for his never banal lyrics and atypical, provocative character, he has 63,000  followers on Instagram. Pelù started his music career from Litfiba band, released several solo albums, created super hits with internationally famous artists, reached No.1 in the National Italian Airplay Charts for over two months. He also took part in 2005 at Live 8 at the Circus Maximus in Rome, participated in various projects with the Modena City Ramblers and Edoardo Bennato. In December 2009, to the delight of all their fans, Litfiba returned to play together, launching two new unreleased albums. In 2013, he appeared as one of the four judges on The Voice of Italy. After a brief pause, the reunion project resumed with Eutòpia in 2016.

Gianna Fratta is not only Pelù’s  ‘Queen of hearts’ (the name of a Litfiba hit) but also an internationally famous orchestra conductor and pianist. She dreamed of becoming a conductor since she was nine, becoming the first Italian woman to conduct the Teatro dell’Opera di Roma Orchestra and the Petruzzelli Theater in Bari, at the Macao Symphony (China), the first woman to lead the historic Berliner Symphoniker orchestra and the first woman to direct a production of the Valle d’Itria Festival. She continues to play, conduct and collaborate with artists at the most important theaters in the world. On March 7, 2009 Fratta was awarded the title of Knight of the Italian Republic for her international achievements as a pianist and conductor. On December 18, 2016 she received an opportunity to direct the Christmas concert in the Italian Senate in Eurovision. The great Israeli conductor, Yuri Ahronovitch, who was Fratta’s teacher,  writes about her “I have never met a director so young and so gifted.”  (maria filatova)