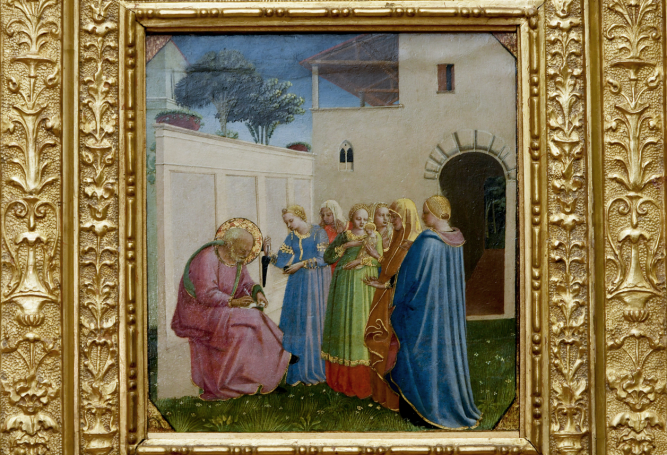 Because Florence is currently in a “yellow zone,” concerning Covid contagion restrictions, Florence’s beloved San Marco Museum has finally reopened–with a surprise.  During its closure it had prepared for the return of visitors by giving an updated look to one of their most popular spaces, the newly dubbed Fra Angelico Room.  The space, along with the rest of the museum, is newly accessible to guests from 8:15 am – 1:30 pm Monday through Friday only.  Admission is €8, and the ticket office does not provide entrance a half hour before closing time.

Formerly known as the “Pilgrim Hospice,” the Fra Angelico Room will continue to exhibit one of the most important collections of works on wood by the Dominican friar who lived and worked in the San Marco monastery in the mid 15th century. Created by the Florentine studio De Vita & Schulze and funded by Friends of Florence, the renovations are meant to cap off the year-long celebration of the museum’s 150th anniversary.

Sixteen of the friar’s early Renaissance masterpieces: Deposition of Christ for the Strozzi chapel in Santa Trinita, Pala di Annalena and the Pala di San Marco will be included in the new set up, along with the panels for the “Armadio degli Argenti,” which were designed to decorate a door at the Santissima Annunziata church, as well as intricately decorated reliquaries. A newly restored Lamentation of the Christ will also be exhibited, revealing a part of the painting that was previously covered in a restoration over 50 years ago. Missing from the collection is the Bosco dei Frati Altarpiece, which is currently under restoration by Lucia Biondi, and the Compagnia di San Francesco Polyptych, which is being restored by the Opificio delle Pietre Dure, will join the collection when completed.

The new design is a major shift from that conceived by former museum director, Giorgio Bonsanti, in 1980. Renovations include new display cases, state of the art lighting, and a neutral color scheme. The works are now arranged in chronological order and are accompanied by updated information panels in both Italian and English and didactics to increase visitor engagement.

“San Marco is the beating heart of the early Florentine Renaissance, not only from an artistic point of view but also from a historical and religious point of view,” says Stefano Casciu, Tuscany’s regional director of museums. “The refurbished room- underlines for its part the director of the museum, Angelo Tartuferi – brings back to the international limelight the incomparable nucleus of Angelico paintings, finally with adequate lighting, which I am convinced will arouse wonder even on the part of scholars.” (savannah camastro)