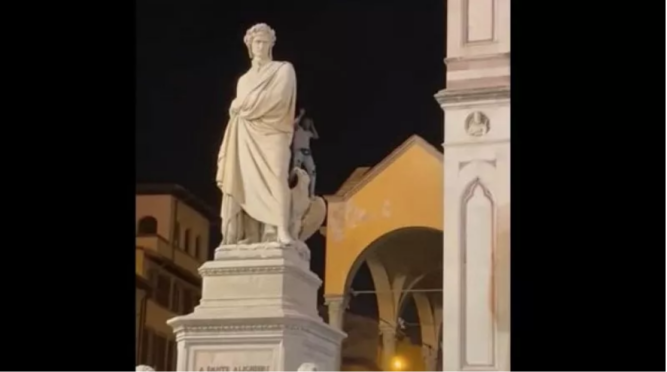 The Dante statue in Piazza Santa Croce will have security measures implemented around its perimeter due to the incident that occurred this past weekend.  After midnight on October 31, a 24 year old man climbed up the tall pedestal to the base of the statue, presumably while intoxicated. This caught the attention of the crowd gathered that night and eventually prompted the involvement of the fire department, using an aerial on top of their vehicle to help the man down.

With similar events taking place over the last year, such as the improvised rave around Santo Spirito, concerns have been raised over potential damage to these monuments during Florence’s nightlife. Palazzo Vecchio’s security councilor, Benedetta Albanese, commented that the installation of perimeter alarms and sensors, like those near the statue of Neptune in Piazza Signoria to prevent people from climbing into the fountain, might have to be placed on the Dante statue after this incident as a safeguard. (nelson matos)