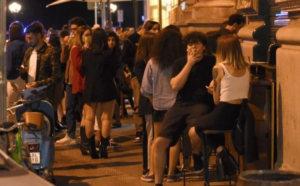 With summer arriving, and warm evenings, active nightlife is returning to downtown Florence. To prevent the disturbances to public peace, 24 security officials will watch over the busiest locations in the city, during the late evenings and early morning.

The security officials, known as stewards in Italian, will not be active in nightclubs or other establishments, but outside for public order and safety, and to give support to police in case of need. The service will start in late May and will be operating throughout the summer. The security personnel are not allowed to intervene in the event of public order incidents, and they are not patrolling. They are meant to prevent public disturbance, contribute to compliance with current Covid health regulations and avoid situations of conflict between tourists, visitors and Florentines.

They will be stationed in Piazza Santo Spirito, Piazza Sant’Ambrogio, Piazza Santa Croce and Piazza della Repubblica, patrolling on Fridays and Saturdays from 10:30 pm – 2:30 am, from June to October.

Public restrooms will be also now be accessible also for free from 9 pm – 3 am in the same areas. This decision was made after an incident involving a drunk on April 25. Nardella stated that he has “[…] already given a mandate to the municipal commander: a hard punch for those who urinate outside the bathrooms. Now, there are no more excuses.”

Just like last summer, there will be a ban on parking in the squares of Santo Spirito, Sant’Ambrogio and Santa Croce.

This initiative was created thanks to a recent agreement between the municipality and the Chamber of Commerce. The operation should cost around 70,000 euros and will be shared by both.  (ted de veer)