Summer Nights at the Synagogue 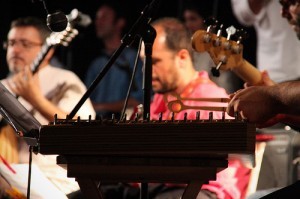 Cultures collide and faiths unite under the starry sky in the gardens of Florence’s synagogue. Inviting peoples of all religions, the Jewish community will host cultural events and various forms of entertainment on Thursdays throughout the summer.

Titled “Balagan Café,” the space aims to foster conversations and interactions as rich in meaning as its name, defined by modern Hebrew sources as “chaos.” Balagan is also a style of temporary theater, performed on city streets in 18th and 19th century Russia, depicting characters that tended to be rougher around the edges.

The word’s true origin is still up for debate: though it is today primarily used in Hebrew, it is believed to have Yiddish, Polish, Turkic, and Persian influences, and the list continues further still.

This etymology lesson is all to say the synagogue gardens are set to create a unique setting for learning from and about each other, all set to a traditional soundtrack. In collaboration with the Cortona Mix Festival, Grammy-award winner Frank London will perform his klezmer, a style of Eastern European folk music that today exists as a fusion of Jewish celebration music and American jazz. (9 pm)

Entrance is free and attendance is encouraged; their offered aperitivo costs 10 euro.