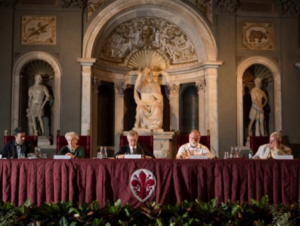 A literary festival culminating in the Von Rezzori award ceremony will return to the city of Florence from May 30 – June 1, 2022. In its 16th edition, the festival, organized by the Santa Maddalena Foundation, will announce the winner of the Gregor von Rezzori prize, established in honor of the late author, Gregor von Rezzori, by his wife, Beatrice Monti della Corte in 2007.

Finalists, and interested writers, may also apply for residency at the foundation’s tranquil estate, located outside of Donnini. Here, they may find literary inspiration amidst the natural scenery of the Tuscan countryside. Thus far the Foundation has hosted authors including Colm Tóibín, Zadie Smith, Michael Cunningham, and Sally Rooney.

The prize is awarded to the best work of foreign fiction translated into Italian, with five finalists on the shortlist. Of the five, two of the original publications are in English. The award jury (including Beatrice Monti della Corte, Ernesto Ferrero, president, Andrea Bajani, Alberto Manguel, Maylis de Kerangal, and Edmund White) released the names of the finalists:

Louise Erdrich is an American-born author who focuses on Native American characters and culture. Winner of the 2021 Pulitzer Prize for fiction, The Night Watchman/Il guardiano notturno is a compelling story about a night-watchman and Chippewa Council member Thomas Wazhashk and the struggles at a Native American reservation during the 1950s.

One of the most translated writers is the Bulgarian author Georgi Gospondinov. Cronorigugio, or “time refuge,” tells the story of Gaustìn, a character who time travels to help others regain their memory.

The plot of Tomás Nevinson by Javier Marías questions moral code and the human limits in the battle between good and evil.

A Lump in the Throat/Un Nodo alla Gola is a part of the poetic novel The Long Take by Robin Roberston, with the action set in the U.S. of post-WWII.

The winner will be revealed on June 1 at 6 pm.

Proceedings will open with a keynote speech by Paolo Cognetti, winner of the prestigious Strega literary award, at the Santa Croce refectory on May 30 at 6 pm.  Reservations are necessary to attend.  The festival will be accessible in a hybrid fashion, both online and in-person; for the full program, visit the website.