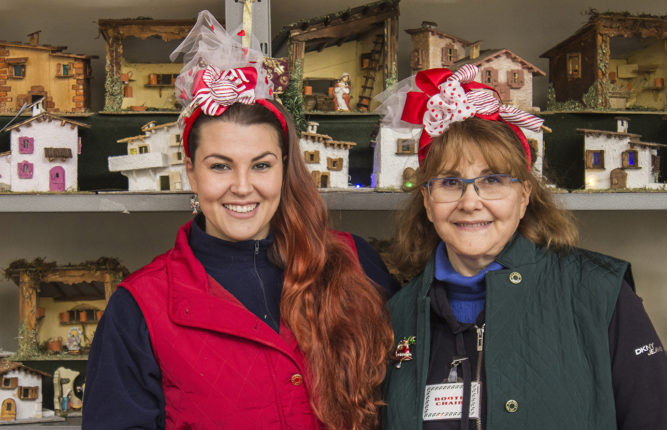 The 2019 AILO Christmas Bazaar will be unveiled by the American International League of Florence for its 44th year this holiday season. This traditional and charitable fair will be held in the historic and beautiful Tepidarium greenhouse in a public park for its second year and promises to bring not only warmth from the Tuscan cold to visitors but also a special Christmas spirit. For two days, there will be an array of booths ranging from food, clothes, toys, books, white elephant, and more in addition to a lottery and silent auction, all in the spirit of giving.

AILO is an ODV, an approved volunteer organization, was founded in 1975 by American women residing in Florence. Many of the approximately 200 international members spend the year planning this event. The current president of AILO, Kimberly Breeze, describes the intense work that goes into the event as “summer camp” for the group with all the busyness and bonding that is needed to make it happen.

Through members, every year a number of charities apply to the group for funding of specific projects and items.  AILO is happy to assist them in their proposed projects. Extensive research is done on each organization, and after the revenue of the bazaar is calculated, each member votes to decide which charities will receive donations. There are 10 non-profits present this year, the Tuscan Food Bank (Associazione Banco Alimentare della Toscana), the Italian Iris Society, ADA Elderly Home Care (ADA Assistenza Domiciliare Anziani), the AMA cat shelter and Institute of the Little Sisters of the Poor (Istituto delle Piccole Sorelle dei Poveri). With an expected €30,000 of proceeds from the bazaar, AILO members vote on the recipients in February.  The bazaar will have an identity booth that will have literature on the club and charities that they have donated to previously.

The AILO 2019 Christmas Bazaar is expected to be packed with visitors from all over Tuscany as well as international guests, wanting to experience a unique Christmas. The event was created to be an American experience and the tradition has been kept up as more Italians crave contact with the U.S. version of the holiday. In the first few years, homemade hotdogs, hamburgers and homemade brownies were served. In years past, homemade baked goods and jams were sold, which are still available to volunteers during setup.

This year, the food booth will be catered by Melaleuca bakery and bistro. Both American and Italian food and beverages will be served. Guests can purchase mac and cheese, mulled wine, and lemonade. Throughout the charity event, there will be around 10 themed booths. One of the most popular is the clothes and fashion area. The group has been receiving clothes from over the course of the year through donations and carefully selecting which are the most stylish; all the clothes are practically new or gently used. Fashionistas are advised to arrive early to get their first pick.

There will be a handmade booth of crafts and gifts made by members. The table will offer baby clothes, sachets of lavender, Christmas décor, and more. Secondhand jewelry will also have its own table as well as books and children’s toys. For the daring, there will be a white elephant section that will contain mostly household goods and a few odd vintage pieces and knick knacks to make it a true white elephant. This year there will be an International table to bring a bit more diversity to the bazaar.

In addition to the booths, there will also be a lottery and a silent auction. There is a wide variety of prizes coming from shops and businesses all across Tuscany. The lottery has been a part of the bazaar for a while and is another American aspect of the Christmas celebration. The silent auction is fairly new and still foreign to many Italians but will still be a success with all of the incredible prizes given by members and private donors. These include a selection of wines from the region and grocery coupons so people can make their dream Christmas dinner.

Another highlight of the AILO 2019 Christmas bazaar is the appearance of Santa Claus and one of his elves at the bazaar. Children can experience the American tradition of sitting on Santa’s lap and telling him what they want from Christmas. It is the perfect way to begin the Christmas season and give back to the community. (jax viteznik)