The Creative Paradise of ‘The Season’ 2018 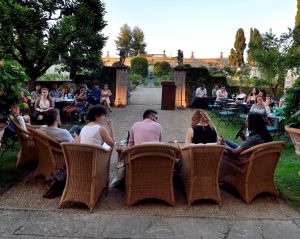 Villa La Pietra will become a creative paradise over the next few weeks for New York University’s The Season, an international celebration of literature, poetry, drama, and film.

Monday, June 11 will be dedicated to a concert of piano sonatas (9 pm) by composer Robert Scarcella Perino performed by award-winning musician Giuseppe Bruno, who has recorded for Rai, Swiss French, and Italian radio. Perino’s music has been performed by ensembles and soloists around the world, including the Orchestra Arturo Toscanini and the Orchestra Regionale Toscana.  Villa la Pietra will host more music on June 26, when Kate Moore, internationally-acclaimed composer and Matthijs Vermeulen Prize of 2017 recipient, will perform a stirring cello rendition of her pieces at the “Saint Mary and the Spider” concert (8:30 pm).

Those who appreciate the art of literature will enjoy The Writer’s Season, a series of six exclusive discussions and readings organized by NYU professor Elisa Biagini from June 12 to 18.  Dialogue with Alexander Chee  in the villa’s rose pergola on June 14 (6:30 pm). The fiction author has written Edinburgh and The Queen of the Night, and his essays and stories have been published in The New York Times Book Review, Slate, and T Magazine.

Readings in Italian and English with translations will take place at the Biblioteca delle Oblate (Oblate Library), overlooking the Duomo, with poets Mihaela Moscaliuc, Vincenzo Frungillo, and others on June 12 and 13 at 8:30 pm. Moscaliuc is the author of the poetry collections Immigrant Model and Father Dirt, and the winner of two Glenna Luschei Awards from Prairie Schooner, a residency fellowship in Switzerland. Frungillo is a Neapolitan poet whose works have been published in various Italian and foreign anthologies.

For a lecture that is as visual as it is intellectually-stimulating, attend Word(s), Image(s), and Intuition on June 15  at 9 pm to discuss American folk artist Joan Baez’s upcoming album Whistle Down the Wind with the filmmaker for the visual album himself, Rick Litvin. The producer will be joined by Deborah Willis, photographer and chair of the Department of Photography and Imaging at Tisch School of The Arts at NYU. Willis’ work reflects on the history of a photograph and the lives of black photographers.

Writer of Into Perfect Spheres Such Holes are Pierced Catherine Barnett will be questioning spirituality, eroticism, and trust in her poems on June 15, 2018 at 9 pm. Kimiko Hanh, winner of the triennial Theodore Roethke Memorial Poetry Prize and author of nine books, will be presenting her poems, which explore themes of love, motherhood, and ethnicity on June 18 (6:30 pm).

Attendees of The Season can also look forward to a book presentation (June 19, 6 pm) by the art conservator of Leonardo da Vinci’s Salvator Mundi, the most expensive painting ever sold, a rendition of Shakespeare’s Romeo and Juliet (June 22, 8 pm)  by an all-female cast, and a lineup of cultural events by the international black community that explore race relations, the power of words in poetry, jazz, and hip hop, and the black visual aesthetic.

Admission is free, though RSVP is required at lapietra.reply@nyu.com or 055-5007-210. For the complete schedule and more information visit the Villa La Pietra website.