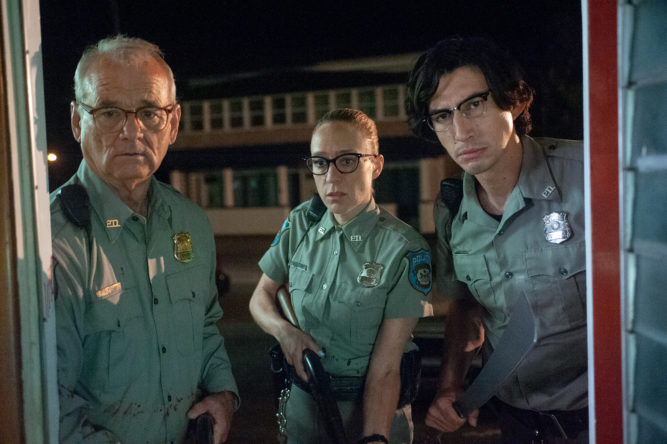 The most important thing to know going into a screening of Jim Jarmusch’s The Dead Don’t Die is that it’s odd. Set in the fictional town of Centerville, USA amidst an environmental disaster, Bill Murray and Adam Driver headline a star-studded cast as two policemen trying to protect their town from the zombies suddenly rising from their graves.

When it opened this year’s Cannes Film Festival, the two major critical takeaways were its overt political statements and its unwavering commitment to deadpan, and that those features made this film fairly divisive. After seeing it for myself, I can add my voice to that chorus. Zombie movies tend to be a safe option for right-wingers, what with gun ownership practically being the key to human survival, but anyone who disputes climate change or voted for Donald Trump might want to skip this one.

Viewers who expect an immersive cinema experience might also find this a frustrating experience, because The Dead Don’t Die does everything it can to push you away. The tone and performances are thoroughly alienating. The pacing is just a few beats too slow to be comfortable. The fourth wall is frequently broken, destroying any kind of internal logic along with it.

And Jarmusch takes the ridiculousness often inherent in zombie films and turns it up to eleven — the dead rise because polar fracking has shifted the Earth off its axis, causing toxic moonbeams — so that no one would ever dream of engaging with its premise at face value. For many, this is the opposite of what they’re looking for from a trip to the movie theater.

Others, however, will admire the alienation and political message, both of which are by design. Following the model of playwright Bertolt Brecht, Jarmusch creates distance between the audience and his film so that they can think about what it means, not what it is. The world of The Dead Don’t Die is a parallel version of our own without façades, without lies, leaving only (admittedly leftist) truths in their place.

Instead of a school, the fictional town of Centerville has a Juvenile Detention Center. The package delivery service is called WU-PS (okay, that one is bipartisan). Characters are deadpan because they are disengaged with reality: The cast injects layers of passion that highlight how apathy grows with age, and Driver and Tilda Swinton give particularly compelling performances. This film takes whatever it believes our world hides away and puts it in plain sight, and the result is so foreign to us that it feels almost unrecognizable.

The point of this film is its politics, and in this storyworld there is no such thing as subtext. Viewers who prefer their metaphors ambiguous and up for interpretation will be disappointed, but that doesn’t mean there isn’t room for multiple readings. With its references to the Trump era, the environment, technology, and consumer culture, Jarmusch casts a wide net and ends up saying quite a lot.

In fact, the sheer number of ideological threads leaves many unexplored, and issues too important to be relegated end up feeling heedlessly thrown in. For all its messages, the film lacks unity, the jolting call to WAKE UP that made Spike Lee’s similarly-Brechtian BlacKkKlansman so powerful last year. The Dead Don’t Die spends so much time exposing a dispassionate America that it forgets to care what happens to its real, dispassionate American audience after the credits roll. (alex harrison)

The Dead Don’t Die begins screening in English at the Odeon tonight, June 13. Check here for times this week!