The Restoration of Ponte Vecchio 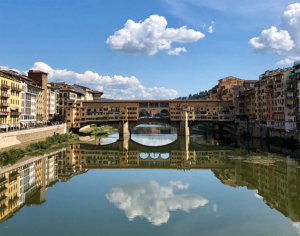 For the first time since it was built in 1345, Florence’s historic Ponte Vecchio will be restored, an operation which will cost about two million euros. The Arno River, which flows below, has caused structural damage over the years, causing concerns for visitors’ safety. The Municipality comments that the bridge requires “accurate cleaning and arrangement,” in order to solve tip structural safety problems. Mayor Dario Nardella reminisces about the bridge’s last transformation, which occurred after the dramatic flood of 1966, causing significant damage to the Ponte Vecchio and the city of Florence.

In the coming days, a floating platform and scaffolding will be set up along the Ponte Vecchio, in order to install a bridge monitoring system. These systems are set to remain in place for one year, in order to design the bridge’s restoration. The floating platform will remain in the Arno for three weeks, occasionally moving to accommodate weather conditions. The platform will be moored by two concrete cubes on the left bank of the Arno, and moved by a small tug boat, allowing for the surveillance of the area. Additionally, a drone will be used to conduct an aerial survey of the platform on October 24 and 25.

The restoration process will remove any algae, lichens, and weeds causing structural damage to the arches of the bridge. Any humidity stains will also be removed. Furthermore, areas decorated with coats of arms and copings will be cleaned, so that they are easier to read. The degraded wood areas will undergo an anti-woodworm treatment and receive a fresh coat of paint. Finally, the roadway will be re-styled, with the addition of protective painting on the pavement, in order to protect the surrounding buildings from water damage.  (Karen Dotan)