Ukraine President to Speak During Protest 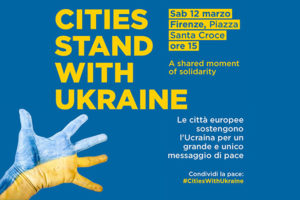 A demonstration in Florence against the war in the Ukraine, simultaneously taking place in 200 European cities, is scheduled in Piazza Santa Croce on March 12 at 3 pm.  The public is invited to attend. Participants will create a human chain to communicate a shared message of peace and to support diplomatic efforts to bring an immediate ceasefire. The social media hashtag is #CitiesWithUkraine.

In the square, a six-meter (20 ft.) maxi screen will be set up and via video connection, Ukrainian president Volodymyr Zelensky will speak during the event. The mayor of Kiev, Vitalij Klyèko, will also make an appearance.

During the protest, the Maggio Musicale Orchestra conducted by Daniele Gatti will play Mozart’s Ave Verum Corpus, which is a short musical meditation on suffering and redemption in the name of peace.

Florence’s mayor Nardella, as president of Eurocities (a network of large cities in Europe) proposed the event during a group summit in Marseille. Thousands of people in cities throughout the EU will take part, representing 38 countries and over 130 million people.

Nardella wrote in his letter: “[…] As mayors we must be aware of the extraordinary and growing importance assumed by cities as political and institutional protagonists of absolute importance on the international scene. In a world where power struggles among nations predominate, we must work together in the spirit of collaboration. […] With the slogan ‘Cities stand with Ukraine,’ we will be able to show unified support to keep borders open and that we will do everything possible to help our neighbors.”

Milan, Rome, Bologna and Naples, as well as European cities Braga, Marseille, Nice, Rotterdam and Cluj-Napoca (Romania) and many are hosting concurrent demonstrations according to Nardella.  (ted de veer)